Noting that 'everybody shines and sound different,' the Bronx rapper, who bags 6 throphies at the 2019 Billboard Music Awards, asks fans to stop 'putting me against others.'

AceShowbiz - Cardi B only wanted to celebrate her big win at the 2019 Billboard Music Awards. So, when her joyous moment was ruined as people tried to pit her against other rappers, the "I Like It" rapper was not having it.

A screenshot, which later turned out to be a fake one, saw Cardi B allegedly bragging and slamming rival Nicki Minaj on Instagram. "AINT THREATEN BY NOBODY WHAT DON'T YALL GET??? I JUST WON 6 AWARDS TONIGHT AN YA FABES WIN NOTHING!!!" the post read. "TELL NICKI TO COME OUT OF HIDING INSTEAD OF WORRYING ABOUT ME."

"YALL LOVE YA SOME BARDI! NAME ONE B***H WHO CAN DO THIS S**T BETTER THAN I CAN!!" she allegedly wrote in the post.

It came across the Bronx rapper herself, who quickly shut down the faux picture, calling it completely "fake." Taking it to Twitter, Cardi wrote, "This Is fake a** f**k!This is why I post it what I post yesterday on twitter because ya constantly make fake s**t up and try to put me against people all the f***ing time!Please get a f***ing life.I had a amazing fun night last night for me to do bulls**t."

Fans weighed in on the situation. One fan wrote, "That's f***ed up....she can never win in peace. People are always starting s**t every time she gets an award." Another comment read, "Not a cardi supporter but I knew this was fake." 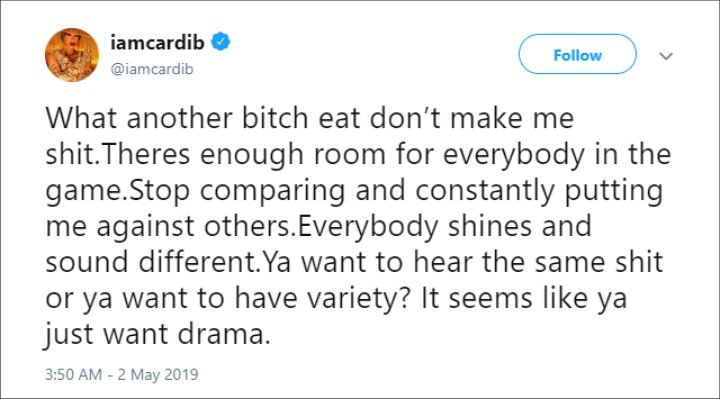 Cardi B calls for a stop on constant comparison between her and others.

Noting that "everybody shines and sound different," Cardi concluded, "Ya want to hear the same s**t or ya want to have variety? It seems like ya just want drama."