The 'Wanted' actress and her six children are all smiles while attending the special screening of Netflix's movie 'The Boy Who Harnessed the Wind'.

AceShowbiz - Angelina Jolie made a very rare official public appearance with all of her six children on Monday night, February 25. The 43-year-old actress/director took her kids to the premiere of Netflix's movie "The Boy Who Harnessed the Wind" at the Crosby Street Hotel in New York City.

Zahara, 14, donned a simple mini dress with black-and-white ankle boots. 12-year-old Shiloh was clad in a white shirt with black jacket and pants. 10-year-old Knox opted for an off-white shirt and gray pants, while his twin sister Vivienne wore a black long-sleeve shirt and navy blue pants with sneakers. 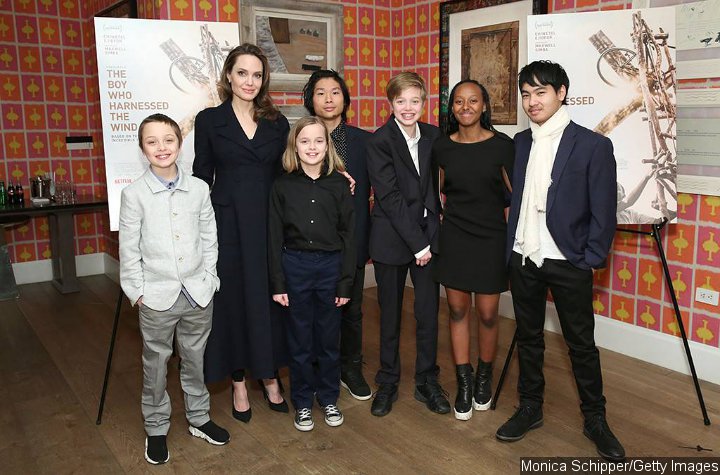 Angelina Jolie and her six kids are all smiles at the premiere of "The Boy Who Harnessed the Wind".

During the event, Angelina sat down with Chiwetel Ejiofor, who directed and stars in the film, and William Kamkwamba for a Q&A session. The film is based on a memoir of Kamkwamba when he was a 13-year-old boy and figured out how to build a windmill to save his Malawian village from famine.

The outing comes less than a week after Angelina took four of her six children, Shiloh, Zahara, Maddox and Pax, to an art event. The fivesome attended the opening of MoMA's Doc Fortnight and the premiere of Prune Nourry's Serendipity exhibition in New York City on Thursday, February 21.

"I'm honored to be here to support my dear friend, Prune Nourry, and to introduce a unique, brave and mesmerizing film," the "Maleficent" star said at the exhibition opening. "A tribute to the spirit of a woman, and a journey into the mind and soul of a true artist."

While the kids have never been seen in public with their father Brad Pitt since the actor's split from Angelina in September 2016, the former spouses have reportedly agreed to split their time with the kids after reaching a custody agreement in late 2018.