The 'Good Advice' actress flaunts her slim body and nipples through her reflection on the window.

AceShowbiz - While celebrating her 55th birthday on July 11, Lisa Rinna took the opportunity to show her fans that she still looked hot despite her age. The "The Real Housewives of Beverly Hills" star confidently shared her nude photo to her 1.5 million followers on her Instagram account. The sexy photo was taken during a vacation with her hubby Harry Hamlin in Canada.

Lisa was seen posing completely naked in front of a window of a lake house and wearing only an oversized hat. In the photo, her nipples as well as her slim waist and hips were reflected on the window. "Birthday suit," she wrote on the caption. 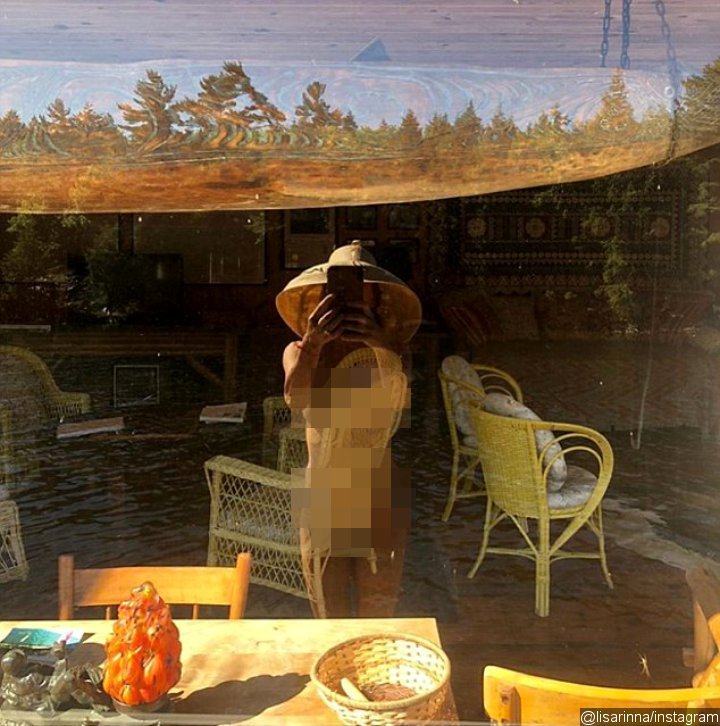 Lisa Rinna flaunts her nipples and slim body to celebrate her 55th birthday.

Unfortunately, the "Nick Fury: Agent of Shield" star had to take down the sultry picture due to Instagram's no nudity policy. After Lisa was forced to drop her naked birthday post from her account, she replaced it with a photo of her wearing a skin-tight black latex jumpsuit while holding a box. "Happy F***ing Birthday to ME!" the mother of two captioned it.

Lisa is no stranger to nude photos. Back in February 2017, the reality TV star celebrated Playboy's return to nude pictorials by sharing her own naked picture in a hotel room. "It's back. I got scared then I said I'm 53 -- zero f**ks given! Congrats to @playboy for going back to nudes," she congratulated the adult magazine before adding, "The female body is so beautiful, every size and every age. Be proud! #thefemalebodyisbeautiful #allshapesandsizes #loveyourself #loveyourbody."

The actress is known to be a supporter of the magazine as she has close connection to Playboy for a very long time. She once modeled for Playboy in 1998 when she was 6 months pregnant with her daughter Delilah Hamlin. In 2009, Lisa returned to Playboy as a cover model.