The Identity of Female Thor Has Been Revealed

In the issue 8 of 'Thor' series which leaked online one day before the book publication, the Goddess of Thunder is finally unmasked.

AceShowbiz - Back in 2009, it was confirmed that "Thor" series would introduce a new version of Thor, who is a female. After seven issues of the series, Marvel will finally reveal the character behind the masked Goddess of Thunder, the woman who picked up the immovable hammer of Thor from the moon after the original Thor, Odinson, was no longer worthy to do so. It will be featured in the upcoming "Thor" #8 issue that will be out on Wednesday, May 12.

A page from the said issue has leaked online and it is revealed that the female Thor is [SPOILER ALERT!] Dr. Jane Foster, a former girlfriend of Thor in the comics, who is portrayed by %cNatalie Portman% in "Thor" movies. "This world needs a Thor. A god who loves the Earth enough to die for it," Foster says in the comic. Foster has been dying of breast cancer and the power of Thor, according to her, can't help her. Taking up Thor's hammer, Mjolnir, actually makes her symptoms worse, so becoming the superhero is physically destroying her. In the book, Foster is presented in a white hospital dress while her hair is gone because of cancer treatment.

Writer Jason Aaron revealed in a statement to Vulture that they chose Foster as the female Thor because "Jane's been a part of Thor's universe going back almost to the very beginning. She was the initial love interest for Donald Blake, who was Thor's alter-ego (in early 'Thor' stories). She was the nurse to his doctor." 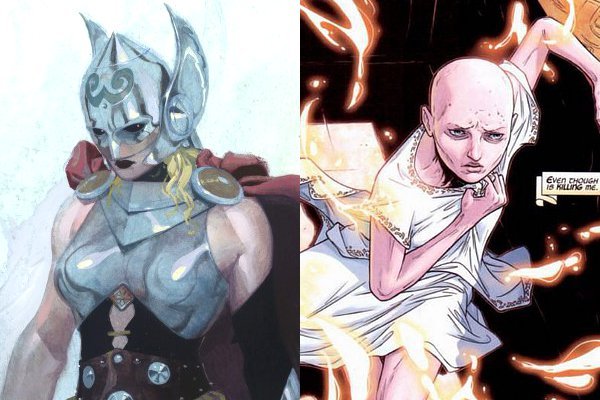 The Identity of Female Thor Has Been Revealed