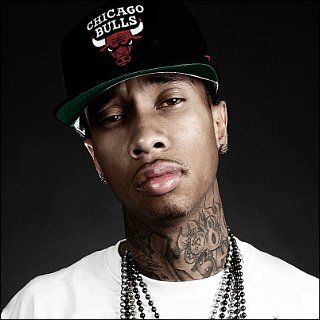 With huge determination and a clear vision of what he wants, Tyga pursued his career as a rapper after an aisle debate with Travis McCoy of Gym Class Heroes. Born November 19, 1989, Michael Ray Nguyen-Stevenson is of Vietnamese and Jamaican descent. Living in the infamous Compton, CA, Tyga raised above the negativity by building social networks and recording mixtapes to enhance his career in music. The big break came through his cousin, McCoy.

Tyga bumped onto McCoy at popular Los Angeles sneakers store, Fight Club, one day. At first they talked about shoes and soon the conversation switched to the greatest rappers. "We started talking about music and I got enough courage to give him my little mixtape" Tyga said. "He was telling me all this stuff he was doing with his band and I thought he was just lying to seem cool. Then one day I saw him on MTV, then I started hitting him up on AIM non stop! Next thing you know I'm on tour with him going all over the world. It was crazy."

Impressed by what Tyga did, McCoy signed him to Bat Squad Records. "I can see myself at his age whenever I watch him perform," McCoy said. "It's an innocence and a sense of urgency a lot of artists today lack and it's an honor for me to welcome him to the inner circle." As part of Gym Class Heroes crew, Tyga earned his solo spotlight when he got the Fall Out Boy acquaintance.

Tyga was shoved into a big stage, the 2007 MTV Video Music Awards, when he was told to perform the remix of "Arms Race" with Fall Out Boy, McCoy and Lil Wayne. Despite the newcomer label, Tyga managed to conquer the gig and impressed Wayne altogether.

"At rehearsal I thought he was just a stand in, but when the cameras were rolling I realized he wasn't playing around," Wayne said. Tyga and the self-proclaimed "greatest rapper alive" became fast friends and they did a collaboration on the latter's "Tha Carter 3". Meanwhile, his solo career was launched with single "Coconut Juice", a S*A*M & Sluggo production that sampled Harry Nilsson's hit "Coconut".

"And Coconut Juice is," Tyga explained, "... [in the] summertime, people really don't wanna hear you talkin' about [sellin' drugs and killin' people]. People sometimes want to hear that, but right now you gotta make music for everybody. It's summertime, it's hot, people are havin' fun." The song became the lead single off his debut album "No Introduction".

When asked about the meaning of his album's title, Tyga said, "...what some people might not understand is before the single, I'd already been on TV, I'd had radio play, you know what I'm saying? I had so many things leading up to this point right now, even before I had a deal. That's why I decided to name the album 'No Introduction'." The effort inevitably featured the production of Patrick Stump of Fall Out Boy. "It's a variety of stuff, it's a little taste of everything for everybody to be happy," the rapper said.

"No Introduction" was released in June 2008 under Decaydance Records and sold only a few thousands copies. Nevertheless, Tyga was a household name among college kids. He supported the album with college tours and later launched the careers of some young rappers through his label G.E.D.

Tyga's networking became larger as he got to know Fabolous, Meek Mill, Birdman, Wale, T.I. and some other Hip-Hop stars. Some of these men were featured in his second studio album, "Careless World: Rise of the Last King", along with Nicki Minaj and Robin Thicke. The first single from the album is called "Far Away", but it was the third single that really launched the anticipation of his new album.

"Rack City" was in his second "Well Done" mixtape but it grew popular on its own and was later included in the studio album. "It's crazy that a song from a mixtape, a song that I thought would just be regional, is worldwide now," Tyga said. "Careless World: Rise of the Last King" was released on February 21, 2012 on Young Money Entertainment. "It's the story about me becoming king in this place I call Careless World. It goes through me being at the bottom trying to get to the top and going through war, love, and stuff like that," the rapper explained.

Jake Paul Unapologetic Despite Backlash Over Partying Amid COVID-19 Crisis