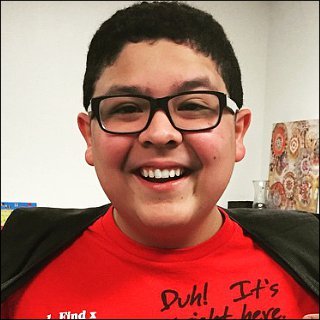 Rico Rodriguez, who is best known as Manny Delgado of sitcom "Modern Family", has never dreamed of becoming an actor. He began interested in the field after seeing his sister Raini Rodriguez acted back in 2006. "I thought I'd be a NASCAR chef going to the moon", the child actor was quoted as saying in an interview in 2010.

And so, Rodriguez kicked off his career with a number of guest spots on TV features, like "Austin and Ally", "ER ", "Nip/Tuck", "iCarly", "My Name Is Earl", and "NCIS". The July 31, 1998 born star got his breakout role in 2009 after being billed to portray Manny Delgado, Sofía Vergara's character's son on "Modern Family" aired on ABC. The role won him the 2010 Young Artist Award for Outstanding Young Ensemble in a TV series shared with Nolan Gould and Ariel Winter.

Ever since he rose to stardom, Rodriguez was named presenter of "Sesame Street" in 2010 and the 2011 Kids' Choice Awards. The Bryan, Texas-bred, moreover, also served as co-host of the 2013 Kids' Choice Awards alongside Nick Cannon. Small screen aside, he had also appeared in films, "Parker ", "Babysitters Beware ", "Opposite Day", and "The Muppets".