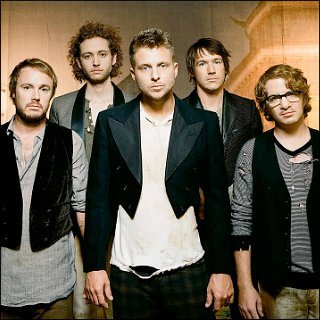 %cOneRepublic% were formed by %cRyan Tedder% and %cZach Filkins% in 2002. They met in their senior year in high school in Colorado Springs. Before making music under the moniker OneRepublic, they formed a band called This Beautiful Mess and played one talent show but broke up after a week. They vowed to spend their time and energy sharpening their skills as musicians and songwriters before making another leap into band life again.

"Most bands they play for years and they suck," Ryan said. "They figure out writing on the back end if they figure it out at all. I always wanted to know that as long as I was alive, I could write the kind of songs that would be hits so I would have a career."

Between his junior and senior years at college, Ryan won an MTV songwriting contest and got a record deal but walked away from the opportunity. He wanted something deeper and felt he had more to learn. So at age 19, he moved to Nashville and learned what it takes to be a good songwriter.

"I had the advantage of seeing all these artists coming through and seeing the ones that worked and the ones that didn't," he stated. "I learned that people who write great songs are the ones that have careers." At about that time, %cTimbaland%, who'd seen Ryan on MTV offered him a production deal and a chance to work together in Miami.

Zach, meanwhile, had studied aerospace engineering at college in Illinois post leaving his band project with Ryan. However, the musician who learned how to play guitar since age 7, felt his passion for guitar blossoming. By 2003, he and Ryan moved back to Colorado. Having done all they could to minimize the risk of starting a band, the two headed up to L.A. and started making music together again.

Nine months later they were signed to Columbia Records. After a few line-up changes, they finally solidified with Ryan on vocal, Zach on guitar and backing vocal, %cEddie Fisher% on drums, %cBrent Kutzle% on bass and cello, and %cDrew Brown% on guitar. Known initially as Republic, they then changed it to OneRepublic.

"Dreaming Out Loud" came out in 2007 as their first studio album. Though still new in the game, they had reached out to such acclaimed musicians as %cJustin Timberlake%, %cTimbaland% and Greg Wells for the effort. Greg helped producing the entire songs of the album. Justin teamed up with Ryan writing smash hit "Apologize" which peaked at No. 2 on Billboard Hot 100 and gave them worldwide fame as it ruled a number of singles charts around the globe. The success of "Apologize" had intrigued Timbaland to remix the song and added it to his own record "Shock Value" part 1.

Since that time, Ryan had written and produced songs for other artists. His credits included %cLeona Lewis%' "Bleeding Love", %cBlake Lewis%' "Break Anotha", %cJennifer Lopez%'s "Do It Well" and many more. As for the band themselves, they were involved in Leona's 2009 song "Lost Then Found".

From "Dreaming Out Loud", they moved on to the next project. In 2009, they have another studio album called "Waking Up" and a tour with %cRob Thomas%. "This album will have more up-tempo songs compared to the last. I think when you tour as much as we did the past three years you not only want to put out songs that move people, but you'd want your own live set to be just as fun for you. Our goal is to create music we love and always make music that's "singable" for everyone. It wouldn't be fun if we played shows and are music was so complex that people could only listen and not participate in singing," Brent exclusively told AceShowbiz about the materials of the album.