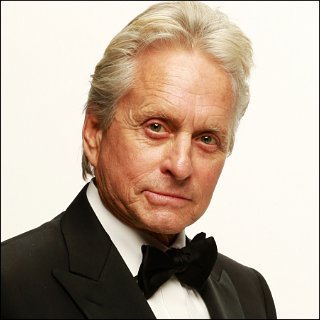 Michael Kirk Douglas known as nowadays American actor and producer was born on September 25, 1944 in New Brunswick, New Jersey, USA from an Entertainment Industry family whose father Kirk Douglas, was one of the world's biggest film stars in the 50s and 60s. When he was still six years old, his parents got divorced and he went to live with his mother and her new husband and seeing his father only on holidays. Attended Eaglebrook school in Deerfield, Massachusetts, Michael started to build his dream of becoming an actor that he often asked his father about getting a 'foot in the door'. Claiming it was an industry with many downs and few ups, such a depressing industry he wanted all four of his sons, Michael, Joel, Eric and Peter to stay out of it, Kirk strongly opposed Michael pursuing an acting career. Insisted to be an actor, Michael had successfully finished his study from Choate Rosemary Hall and the University of California before he stepped on his first acting career ever.

Michael first career started in the early 1970s, the time when people were all too ready to tag him as 'The next Kirk Douglas.' Wanted to erase that prejudice and be different, Michael defied all those critics by accepting wimpy, hippy, quiet roles, a far cry from the leading man, all-American hero roles that his father was most famous for. Such effort, however, didn't earn him much credibility instead of his own identity. It takes time for Michael to come to his first real break, which came on the TV show "The Streets of San Francisco" began in 1972 and kept involving in the show production until he quit it in 1975 to produce "One Flew Over the Cuckoo's Nest." Then on March 20, 1977 Michael married the young Diandra Luker, who sometimes after gave birth to their son, Cameron, filed for a divorce claiming that she was sick of Michael womanizing, absenteeism, and not being 'a proper father to Cameron'. Thus, both legally divorced in June 2000.

Known as a capable actor, Michael's career was somewhat got stuck after the series and he only appeared in occasional movies which were usually less than popular, for example 1979's Running. This condition encouraged him to explore his career at comedies, resulted in the most successful being "Romancing the Stone," which is an American 1984 action-adventure film where he played as a swashbuckling opportunist Jack T. Colten who is promised US $375 in traveler's checks by Romance novelist Joan Wilder who flies down to Colombia from New York in return for helping her find her way to Cartagena. The Jack T.Colten role he played in the film had definitely introduced Michael as a capable and likable leading man, gave him chances to play in some other movies and films. Appeared to be true that in 1987 he starred in "Fatal Attraction," a horror film tells the story of a married man who has an affair, only to discover that the woman with whom he had the affair is not ready to let it end.

In 1992, Michael got his another chance playing in another success film production, Basic Instinct, a thriller focuses on the sex and violence where he portrayed Nick Curran, a San Francisco homicide detective investigating the murder of rock and roll musician Johnny Boz. Acted in both Fatal Attraction and Basic Instinct, many people tend to perceive Michael was being typecast in the 'Man against Woman' type roles.

At first he did nothing to the gossip, but at the end he tried to break away this image by playing in the 1995 movies "The American President" and in a 1996 film production entitled "The Ghost and the Darkness." Still this image continued when he started dating the 25 years younger beauty, Catherine Zeta-Jones, even after their marriage held on 18 November 2000. From the second marriage, Michael gets two another children named Cameron Douglas and Dylan Michael, for whom he then tries to settle down to become a more 'family-oriented' actor. Be more family oriented doesn't mean the end of Michael acting career that he then in the year 2000 starred in the comedy Wonder Boys and also in 2003 movie Runs in the Family, from which he seemed to one more time looked for a career change.

Won't give up his destiny, Michael insisted trying to play at light-hearted comedies, like a re-make The In-Laws released in 2003, which he hoped could break away the reputation he had acquired in the past. Though he hadn't win his reputation yet, still he gained some awards for his good deed in filming. Some awards Michael has got, for example ranked #74 in 1997 Empire UK magazine's "The Top 100 Movie Stars of All Time" list; received an Academy Award as producer for One Flew Over the Cuckoo's Nest in 1975 and for the leading role in Wall Street in 1988; chosen as one of the most sought after actors in Hollywood and commands a hefty sum for his roles; and named to Quigley Publications' Top 10 Poll of Money-Making Stars six times between 1985 and 1995, hitting a high of #2 in 1987.

The second half of the first decade of 2000s delightfully found Michael continuing to strive forward through a number of big screen features he managed to score parts in. 2006 saw him appear in both "The Sentinel" and "You, Me and Dupree" while 2007 marked his acclaimed performance in Michael Cahill's "King of Calfornia" opposite %cEvan Rachel Wood%. It was then followed by other enactments in "Racing the Monsoon" (2008), "Tragic Indifference" (2009), and "Money Never Sleeps" (2009) in which he would reprise his role as Gordon Gekko besides few producing duties for "The Mechanic" and "Art Con", both slated for 2008 release.