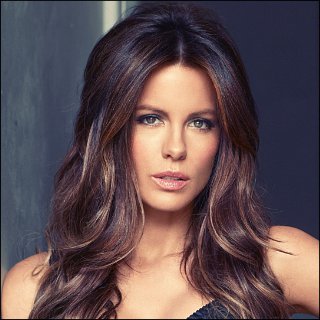 Kate Beckinsale has meaningfully represented one of highly acknowledged British actresses to survive the adversity of Hollywood's showbiz. Being bold and attractive in appearance, she is amid the process to a constant thriving career to top the chart of Hollywood's leading female actresses.

Fathered by the famous comedian %cRichard Beckinsale% and mothered by %cJudy Loe%, a TV series actress, Kate Beckinsale inevitably inherits artistic blood. Her father was the early-seventies actor in various British comedies, such as “The Lovers” (1970), “Porridge” (1973), and “Rising Damp” (1974). He once married to %cMargaret Bradley% and had %cSamantha Beckinsale%, Kate's half sister before actually married Judy Loe. Born in London, England, on July 26, 1973, Kate didn't have much chance to know his father as Richard died of heart attack in 1979. Judy Loe later on remarried to Roy Battersby in 1997. Recalling the times when her father left her, Kate said “It's a very difficult thing losing a parent, but I think there's an added complication for me, because he was so well-loved and he had this very open charm that made people feel they had a personal relationship with him.”

The incident, indeed, didn't hesitate Kate to move on, she was apparently a smart kid. Kate had distorted the very foundation of thought that many celebrities have a shortage effort of fulfilling their heads with higher education. In her teens she won the British bookseller W. H. Smith Young Writers' competition twice for her three poems and three short stories. In her adolescence, she started to take serious acting performance. Unfortunately, during this phase she was rather stumbled by her anorexia problem as well as the addiction to smoking. The anorexia problem was cured immediately, but the smoking habit retained until adulthood, she found it hard to release herself from cigars. “I try and take lots of vitamins and I don't drink. I do smoke, though, I'd be insufferable if I didn't smoke, you'd have to push me off a balcony I'd be so boring.”

Kept moving on Kate made the first trial of her capability in performing when she filled in the voice of Young Alice Mair in a TV mini series titled “Devices and Desires” (1991). Her acting debut can be seen in a 'based on a true story', Golden Globe winner film taking set in the middle of World War II, “One Against the Wind” (1991) as %cJudy Davis%' scandalous daughter. In the same year she entered Oxford University to learn French and Russian Literature. She had a long thought over the possibility of choosing drama school instead of going to Oxford before eventually thought that a wider knowledge could be very useful. While pursuing her education, her acting flame never died. She accepted as many as five projects, among others included Shakespeare's “Much Ado About Nothing” (1993) that was adapted into film, contemporary mystery drama “Uncovered” (1994) and %cGabriel Axe%'s “Prince of Jutland” (1994). Taking a break from acting, she then joined Oxford's study program in Paris, France for less than a year.

At this point, she was forced to choose the direction of her life, one way led to the pursuit of her already spinning acting career while the other one was the urge to complete her already-three years study. She preferred the former and she didn't make a false choice. As soon as assembling energy and time for acting, an offer came from director %cJohn Schlesinger% to play Flora Poste in “Cold Comfort Farm” (1995). This BBC production TV movie was nominated for 1996 Emmy, 1997 Golden Satellite Award and followed by several awards winnings. Moving from comedy, she played in a thriller movie “Haunted” (1995), teaming up with %cAidan Quinn% and also in %cJane Austen%'s romantic saga “Emma” (1996) as Emma herself. She afterwards was pushed to learn American accent for the sake of her new film project “The Last Days of Disco” (1998). Together with %cChloe Sevigny%, they portrayed the youngsters who were searching for the meaning of life as the days of disco culture started to vanish. The following year, Kate still upheld her American character in the movie “Brokedown Palace” (1999) playing a tourist who was accused of drug trafficking due to her involvement with an Australian couple, one of them was played by %cClaire Danes%.

The talented actress' name, in fact, was much more audible in “Pearl Harbor” (2001), the most expensive mega blockbuster ever made. Her cast as nurse Lt. Evelyn Johnson contributed much to the success of the movie. And still in the same year, she was involved as a leading actress in the movie about intersection of destiny and fate, “Serendipity” (2001) together with %cJohn Cusack%. Enough with drama she savored action fantasy “Underworld” (2003) in which she was reluctant at first but fell in love immediately after reading the script. Her character Serene, the tough but beautiful warrior, had brought a new image that didn't trap her in romantic genre. In this movie also that she played along %cMichael Sheen%, the Welsh actor as well as the father of her daughter, Lily Sheen, born on January 31st, 1999. They broke up after several years of companion and later on Kate married the director of “Underworld”, %cLen Wiseman% on May 9, 2004. Upon coping with motherhood she said “As a mother, you feel much more vulnerable. And when you're vulnerable, you're a much better actress.”

Still pumping up with adrenalin, the petite actress accepted the role of Anna Valerious in the movie still about vampires, “Van Helsing” (2004). Although this movie did torture her physically, she was lucky to get the chance to play along the reputable actor, %cHugh Jackman% "I really became black and blue. That was quite hard going. Hugh Jackman has the reputation for being the nicest man in the world and he really is. I made it my mission to find out if it's real or is he torturing hamsters in his spare time? He's so sweet.”

A meatier movie was still coming along her way. She swallowed a role in an 'Oscar –potential' movie, “The Aviator” (2004). Compatible to its famous casts, such as %cLeonardo DiCaprio%, %cCate Blanchett% and %cJohn C. Reilly%, this movie was a huge success, gaining countless nominations and winnings. However, the cream of the movie was Cate Blanchett while Kate didn't receive any compliment for her contribution playing Ava Gardner. Indeed, a veteran Hollywood actor %cLauren Bacall% criticized Kate's inability to portray the character. So much for playing real life character, Kate's Ava was claimed to be less ravishing than the real person.

By the year 2006, Kate reprised her old time character Selene in “Underworld: Evolution,” which surprisingly became a worldwide success with ticket sales reaching $27.6 million in its first week of release, automatically rocketed the horror flick to the top position of North America box office. In the same year, she also appeared in less action genre, joining %cAdam Sandler% in %cFrank Coraci%'s hit family comedy “Click” followed by the novel-adapted movie about complicated marriage “Snow Angels” and "Vacancy", both released in 2007. The following year delightfully spotted her again playing a heroine in action thriller “Whiteout” besides taking part in ensemble drama “Winged Creatures” alongside %cForest Whitaker%, %cDakota Fanning%, and %cJennifer Hudson%, among others.