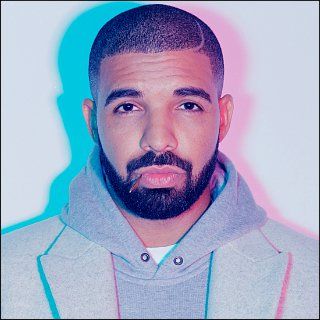 Aubrey Drake Graham a.k.a Drake was raised only by his mother in Toronto, Canada since he was just five because his parents got divorced. Sometimes, he spent summers with his father in Memphis. He had started writing songs since he was ten years old. However, he began his career in showbiz industry as a small screen actor.

Drake, who was born on October 24, 1986, got his first role as a junior high schooler named Jimmy Brooks on Canadian teen drama TV series "Degrassi: The Next Generation". As years went by, he got more roles on such TV series as "Soul Food", "Conviction", "Best Friend's Date", "The Borders", "Sophie" and "Being Erica".

Gaining popularity as small screen actor, Drake couldn't resist trying his hands at music industry. In February 2006, he released his first indie mixtape titled "Room for Improvement". The next year, he returned with another independent mixtape "Comeback Season". One of its singles, "Replacement Girl", peaked at number 21 on Bubbling Under R&B/Hip-Hop Singles chart.

Drake developed close relationship with Lil Wayne and became his protege after making a collaboration with the rap mogul on a remix of song "Man of the Year". Under the assistance of the Young Money founder, he worked on an indie mixtape "So Far Gone" and dropped the effort in February 2009. In the set, he joined forces with his mentor, Trey Songz, Peter Bjorn, Lloyd, Omarion and many more.

Drake made his debut on Billboard Hot 100 through "Best I Ever Had", the single in "So Far Gone". Having no featured guest on the hook, this track climbed to number 18 on the U.S. singles chart. It also peaked at number 1 on Billboard Hot Rap Tracks and at number 2 on Billboard R&B/Hip-Hop Songs chart. He reached all his popularity and achievement as an indie singer, being signed to no record label not even to Weezy's label, Young Money.

Drake once dated songstress Keshia Chante. Following his break-up with her, he crafted a song called "Deceiving", making reference to her mother Tessa. He also remixed one of her songs "Fallen", adding lines, "Keshia, Keshia, do you remember the old us? They said we'd never be together that's what they told us. Immature kids, to entrepreneur kids," to the track.

In 2009, Drake was rumored embarking on a love relationship with Rihanna following her nasty split from Chris Brown. He was said kissing the Barbadian singer at Lucky Strike Lanes & Lounge on West 42nd Street in mid May that year. He initially denied it during an interview on New York's Hot 97 radio station, but later admitted they had a brief fling but she called it off.

In June 2009, Drake threatened to sue a label named Canadian Money Entertainment over unauthorized album called "The Girls Love Drake", which was a compilation of selected songs from his "So Far Gone" mixtape. There were many samples, some of which were from David Banner, Goapele and Colun Munroe, in the record which hadn't been cleared, and his manager Al Branch was concerned about the possibly of him being sued over illegal samples.

"This is a straight bootleg, a scandal. We are behind promoting records at radio, but haven't sold it," Branch said. "iTunes' position is that they are a store and they stock everything. They have a waiver and as long as people sign it and are responsible for the product they submit, then they go for it."

However, Peter Greenwood from Money Entertainment defended their action, stating, " 'The Girls Love Drake' was just a combination of new and old songs that we had been promoting on the underground scene for the last six months and so we wanted to get more exposure for it on the net. Breaking him in the states along with other Toronto artists has always been our goal. Drake is our hometown hero."

Being considered as one of rising stars, Drake received several record deal offers from major labels. There were at least three giant companies, including Universal Motown and Atlantic Records, which were involved in "one of the biggest bidding wars ever" to get Drake signed to their company. One of the labels reportedly had offered $2 million to persuade the young artist to join them.

In the making since 2008, his debut studio album "Thank Me Later" was finally released in 2010 via Cash Money/Young Money. Featuring a slew of top-notch guests like Alicia Keys, T.I., Young Jeezy, Jay-Z and his mentor Weezy, it flew up high at No. 1 on Billboard Hot 100. It was even touted by critics as one of the best rap albums of the year. As a thank you to his fan base, he embarked on a college tour right after that.

Besides cooking up materials for his own record, he is also involved in the making of Weezy's rock-themed effort "REBIRTH" and Rihanna's new album "Loud". His duet with RiRi, "What's My Name?", became a huge success on the charts all over the world. It the U.S., it peaked at No. 5 on Hot 100, giving him his second top 10 single after "Find Your Love" from his debut CD.

Drake was unstoppable. It seemed like every musicians wanted to work with him as he jumped on almost every hip-hop artist's songs just to drop a few verses. He even launched his very own OVO music festival that tapped powerhouse performers like Eminam and Jay-Z.

His sophomore set "Take Care" came a year after the first one was released. His fans were in for special treat in this record as not only did he rap but he also sang. It spawned viral hit ballads like "Marvin's Room" and "Headlines". It bowed at No. 1 on Hot 200 with more than a half million copies sold in its first week. On top of that, it earned him his first Grammy award for Best Rap Album. He also got numerous other prizes like VMAs.

2012 came and he was readying himself for another chart takeover as a third album was on the way. Between performing and recording, he was entangled in a feud with Riri's ex Chris Brown. They were involved in a bottle-hurling fight at a VIP nightclub in summer that year. The club was destroyed and many patrons were injured, leading to numerous lawsuits being filed.

Whatever personal issues he had didn't dampen his creativity. His third effort "Nothing Was the Same" was finished by the end of summer and ready to be released on September 24, 2013. "This is my f**king moment to say if I wanted to rap all the time, really rap, I would, but I also love to make music. I'll do this for you right now. But it's for me, too. It's my story. I'm trying to get back to that kid in the basement. To say what he has to say. And I'm trying to make it last," he once said.

"Nothing Was the Same" went on to become another No. 1 album for Drake. He then spent 2014 promoting the effort with a tour and several TV appearances, including "Saturday Night Live". His next project came in 2015, when he surprised everyone with "If You're Reading This It's Too Late". The set, which was confirmed as a mixtape, also debuted at No. 1 on Billboard 200.

Later that year, he appeared as a guest on Meek Mill's album "Dreams Worth More Than Money". His contribution to a song called "R.I.C.O.", however, started a feud with the MMG rapper, who publicly accused him of not writing his own lyrics. Drake then responded to the accusation with two diss songs before Meek fired back with a diss track of his own.

Drake continued to diss Meek in some tracks from his other surprise release, "What a Time to Be Alive". The mixtape, a joint project with Future, also hit No. 1 on Billboard's albums chart.

That year also saw Drake dropping his viral hit "Hotline Bling". The track was expected to become his first No. 1 single on Billboard Hot 100 as a solo act. In the end, it could only peak at No. 2. However, he later landed atop the list in early 2016 with "Work", his new collaboration with Rihanna off the Bajan singer's album "Anti". The song spent nine consecutive weeks at No. 1.

In April, Drake finally set a release date for his new full-length. Originally announced as "Views from the 6" to honor the MC's home country of Canada, the album has been retitled to only "Views" and is due out on April 29.

"Views" debuted atop Billboard 200 chart and became Drake's most commercially successful album as it ruled the chart for ten nonconsecutive weeks. Additionally, the effort achieved double-platinum status in the U.S. and earned over one million equivalent album units in the first week of its release.

2016 was a busy year for the singer. Not only returning as a musical guest in an episode of "Saturday Night Live", but he also hit the road together with Future for their joint tour "Summer Sixteen" in support of their collective mixtape and their respective studio albums. Even though the tour was eventually postponed due to his ankle injury, it didn't stop him from releasing new music. In late 2016, he released a collaborative track "Child's Play" with Kanye West along with its music video.

Judging by the success of "Views", it came as no surprise that Drake earned many achievements for it. He was dubbed the top nominee at the 2016 BET Hip-Hop Awards and won the awards for Album of the Year and Best Hip-Hop Video. Drake was later named Spotify's most streamed artist for two consecutive years. He also won Best Rap/Sung Performance and Best Rap Song at the 59th Grammy Awards. He later announced that he would embark on a world tour called "Boy Meets World Tour".

Drake continued his success by releasing a commercial mixtape titled "More Life" on March 18. 2017. Just like "Views", the effort debuted atop Billboard 200 after racking up 505,000 units in its first week. It also set a streaming record, becoming the highest ever streamed album in 24 hours, with a total of 89.9 million streams on Apple Music alone.

The hip-hop superstar didn't release any new music after releasing a collaboration with Metro Boomin and Offset on "Signs". However, some of his unreleased tracks kept surfacing online, including "Police" and a collaboration with Quavo. Welcoming 2018, Drake surprised his fans by releasing two tracks "God's Plan" and "Diplomatic Immunity". In the latter track, he rapped about Jennifer Lopez.

6ix9ine in Hot Water for Dissing Nipsey Hussle, Pop Smoke Over Their Deaths