Lafayette inspects Sookie's mirror to find the source of the disembodied voice that threatened her, but he fails to sense anything unusual. The two commiserate that Tara still isn't speaking to them. Just then, Lafayette begins to hear voices-including Gran's. She tells them Sookie is "sleeping on top of" what they're looking for. They go through a box of memorabilia from under her bed and share a giggle over a framed report card, a celebration of Jason's only B, given to him by Lynn Dearborne, the sheriff's wife. Sookie re-reads her parents' obituary and realizes Bud Dearborne found their bodies.

In response to questioning from the Bon Temps sheriff's department, Jessica refuses to implicate Hoyt as a member of the hate group. She tells Jason she's worried: she can't tell if Hoyt's in danger. Jason assures Jessica he will find Hoyt and then sends her home with Bill's guards. Deputy Kevin finds a website that Joe-Bob visited regularly: www.keepamericahuman.com. When they watch a video on the site, they realize that the hate group has also been exposing vampires to the sun for "the Dragon." Andy and Jason beat Joe-Bob, but he refuses to reveal the Dragon's identity.

Feeling better, Luna refuses to rest and insists on joining Sam in their hunt for the anti-supe group. When Sam says he's only trying to protect someone he loves, Luna says she loves him too-but she's coming with him. Sam and Luna report to Andy they picked up a pig scent in the hate group's basement. With the station crawling with reporters, Andy tells Sam and Luna to lay low, so the two secretly shift into flies. Andy re-watches the hate group video and realizes that a masked hater is wearing the boots they gave Sheriff Dearborne on his retirement.

At Fangtasia, Tara and Pam realize whoever is responsible for the factory bombings wants the vampires to begin feeding on humans. Aware that Pam is worried about Eric, Tara offers a sympathetic ear, but Pam tells her they're not "Oprah and Gayle."

Eric tells Bill to tone it down; it was the drug, not Lilith, talking. Bill admits he doesn't know what to believe. Because Molly can't provide any tech help, Eric asks Bill to get some of Salome's blood-they'll need it to escape. Eric works on Nora for her blood, under the guise of wanting to believe in Lilith too.

Arlene reports to work and is taken hostage by Patrick. When Terry arrives, Patrick takes him hostage too-his wife is pregnant, he promised her he'd come home. As Patrick takes aim, Arlene grabs the pencil holding up her hair and stabs him with it. After a struggle, Arlene ends up with Patrick's gun. Patrick tries to talk Terry out of killing him, while Arlene eggs on Terry to shoot him "for your family!" Zaafira, the Iraqi mother, appears before Terry and gives him a nod to do what's right. After Terry kills Patrick, Zaafira removes the curse.

Sookie comes to in a pigsty where she spots Hoyt, drugged into submission. She's unable to conjure enough of her faerie powers to free her hands. Bud tries to explain to her he was just trying to protect people. Sweetie, dressed in a short silk robe with a dragon embroidered on it, elaborates: The next world war will be fought for humanity. Searching through Sweetie's memory, Sookie learns her husband left her for a shifter. Furious, Sweetie instructs Bud to knock Sookie out with soda laced with Oxycontin.

Andy and Jason raid Sheriff Dearborne's house but it's empty. Inside, Jason remembers-Lynn Dearborne's family had a pig farm.

The haters toss a drugged Sookie into the sty for the pigs to feed upon. One of the pigs shifts into Sam, who moves her to safety before taking on the other haters. At that moment, the Bon Temps Sheriff's Department arrives. Andy instructs Bud to stop, and when he doesn't, Andy shoots his mentor. Jason spots Hoyt and tries to revive him. Sweetie is chased by a dog-who turns into Luna. Luna beats up Sweetie.

Salome seduces Bill with a dance and her conviction: "Lilith has chosen you as my Adam," she says. Bill makes love to her, but she is transformed first into Sookie, whom he drains, and then Lilith. In the moment, Bill realizes he has some of Salome's blood on him.

Pam spots a new vampire in Eric's throne feeding in public. When she tells him off, he breaks the bad news: It's now legal to feed in public, Eric is gone, and she's talking to the new sheriff. He then encourages the crowd to grab a human-drinks are on him.

Russell takes Steve to the Shreveport wolf pack meeting. The wolves hail Russell and feed hungrily from his wrist. Only Martha, embracing were-pup Emma, stands back. Unable to change her mind, Russell grabs Emma and presents her to Steve as his new pet. J.D. tries to intervene, but Russell overpowers him. The two vampires leave with Martha's granddaughter.

Driving to Jackson, Mississippi, Alcide remembers being initiated into his first pack as a teenager. It was his father, Jackson, who taught him and a teenage Debbie what it meant to belong. Arriving at his father's house, Alcide tells Jackson that he's been abjured. His father remarks he's just like his old man.

Eric lures Nora to the lobby and extracts some of her blood. Bill appears at the last minute-but with Salome and soldiers hiding in the elevator. When Eric calls him a traitor, Bill tells him it's what Lilith wanted. 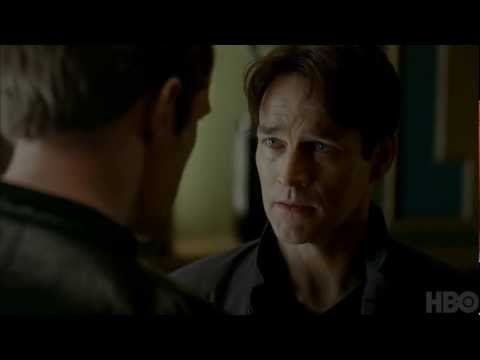 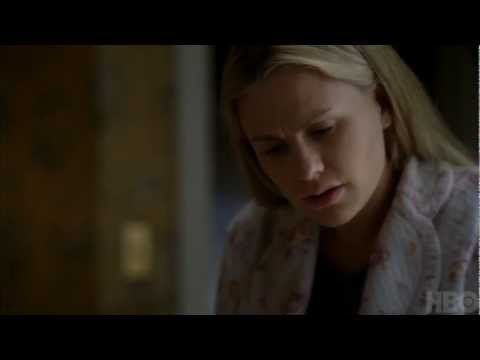 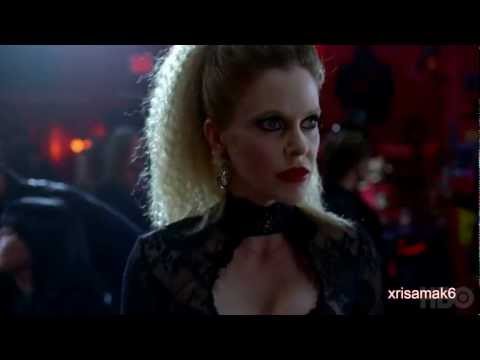