The 41-year-old media personality shares in a new interview that she's 'excited to start our family together' after announcing the arrival of her and Carter's baby boy on Instagram.

AceShowbiz - Paris Hilton is a new mom! The hotel heiress has shocked fans after she turns to Instagram to announce that she and her husband Carter Reum have welcomed their first child together, a son, via surrogate.

On Tuesday, January 24, the model and socialite treated her 22 million to the first picture her new bundle of joy. "You are already loved beyond words," so she wrote in the caption alongside the close-up picture of her baby boy gripping her thumb.

Friends and fans showered the new mom and her little family with love with Kim Kardashian commenting, "So happy for you guys!!!" Miranda Kerr wrote, "Congratulations," alongside three red heart emojis.

Chrissy Teigen added, "a BABY!!!! Congratulations so happy for you both!!" As for Heidi Klum, she penned, "I am Sooooooo happy for you . Sending lots and lots of love." 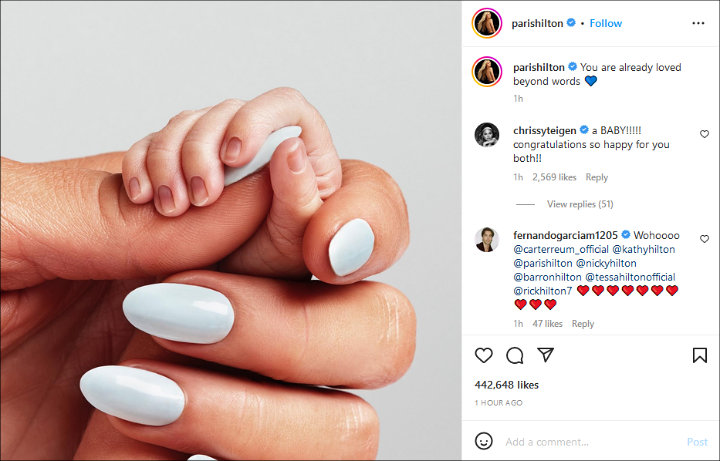 In a new interview, the new mom admitted that "it's always been my dream to be a mother." The 41-year-old media personality further told PEOPLE, "I'm so happy that Carter and I found each other. We are so excited to start our family together and our hearts are exploding with love for our baby boy."

Paris has yet to reveal more details about her baby boy. While this is her first child, the newborn is Carter's second child as he also shares a 10-year-old daughter with reality TV star ex Laura Bellizzi.

Prior to this, Paris had opened up about her desire to become a parent with Carter as she discussed their plan to have a baby through the in-vitro fertilization (IVF) process following their wedding in 2021. "We started going and doing it like a few months in because the world was shut down," she told the news outlet back in December.

She elaborated, "We knew we wanted to start a family, and I was like, 'This is perfect timing. Usually, I'm on a plane 250 days out of the year, and let's just get all of the eggs stocked and ready,' and we have tons of them just waiting."

She also previously clarified her mom Kathy Hilton's remarks which said that she and Carter were struggling to conceive. "I have tons of embryos that are waiting, we've been stocking up on a lot of them," Paris  stressed when she was asked about her mother's remark. In a separate interview, she revealed that she wanted "two or three kids" with her husband.

Paris Hilton Adopting New Cat After Her Dog Is Missing