The Grammy-winning female emcee makes use of her Twitter account to speak on the Peacock docuseries about Casey, who is accused of murdering her own young daughter.

AceShowbiz - "Casey Anthony: Where The Truth Lies" left Cardi B pissed off after watching it. The "Bodak Yellow" hitmaker made use of her Twitter account to speak on the Peacock docuseries about Casey, who was accused of murdering her own young daughter.

Expressing her anger in a tweet, Cardi wrote on Monday, December 5, "I don't give a deum how they flip, switch it, turn it, toss it." The raptress continued, "Casey Anthony is a disgrace of a mother and she shouldn't have a uterus." The mom of two went on writing, "I don't feel bad for her or for the daddy YALL KNOW WHAT HAPPENED to that baby !!!!"

Fans were with Cardi in this. "Literally! In the preview of her show she said 'yes I lied, but nobody asked me why' girl what?????" one Internet user said. "Exactly. I believe The fathered abused Casey as a child & she allowed him to abuse her baby too sick!" someone else added.

"Casey told police that she worked at Universal Studios, went there with them, walked around the building waving at employees and only admitted to not really working there once they reached a dead-end hallway. She absolutely killed that baby," one person wrote.

One other shared, "Watched the first episode and found myself screaming guilty over and over again. She lied She covered up and showed no concern for her child. 30 days and you don't let anyone know and cover up for your predator Dad. My pressure is rising again....I can't."

Referring to Casey's father George Anthony, one person noted that it was George who killed 2-year-old Caylee in 2008. "Her daddy did!! She's still guilty for something but her daddy did it," said the person.

On the docuseries, Casey also blamed George for her daughter's death, accusing him of staging Caylee's drowning in order to cover up that he might have been abusing his granddaughter. "I wasn't feeling that great, and I wanted to lay down," Casey recalled the moment on June 16, 2008, when Caylee was last seen. "I had her lay in bed with me."

"I was awoken by [my father] shaking me and asking me where Caylee was," she went on saying. "That didn't make sense. She would never even leave my room without telling me. I immediately started looking around the house. I go outside and I'm looking to see where she could be."

She said that she then saw George holding her daughter. "He was standing there with her," she shared. "She was soaking wet. He handed her to me. Said it was my fault. That I caused it. But he didn't rush to call 911 and he wasn't trying to resuscitate her. I collapsed with her in my arms. She was heavy, and she was cold."

"He takes her from me and he immediately softens his tone and says 'It's going to be ok.' I wanted to believe him. He took her from me and he went away," she, who later stayed with her then-boyfriend Tony Lazarro, added. "During the 31 days, I genuinely believed that Caylee was still alive. My father kept telling me she was ok. I had to keep following his instructions. He told me what to do. I tried to act as normal as I could."

Six months after the little girl vanished in 2008, her remains were discovered in a wooded area near her family's Florida home. Casey was arrested and charged with first-degree murder, was eventually acquitted on charges of murder, manslaughter and child abuse. However, the jury found her guilty of providing false information to the authorities, leading to a four-year sentence in jail.

Cardi B Laments 'Not Bragging Enough' Is Her Biggest Flaw 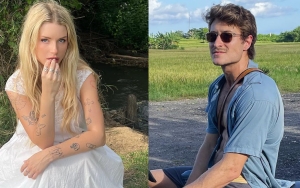