The 'Cool for the Summer' hitmaker turns to her social media account to tell her fans how 'grateful' she's to spend the turkey-centric holiday with her new beau.

AceShowbiz - Demi Lovato and Jute$ are happy to celebrate their first Thanksgiving holiday together as a couple. Making use of her social media, the "Cool for the Summer" hitmaker expressed her excitement.

On Friday, November 25, the 30-year-old singer offered a glimpse of how she celebrated Thanksgiving with her boyfriend, whose real name is Jordan Lutes, by uploading a series of sweet snaps on Instagram Story. In the first slide, the "Camp Rock" actress looked smitten as she posed with her beau for a bathroom mirror selfie.

Demi later uploaded a sweet selfie, in which she and Jute$ both sported a huge grin. "Grateful for this guy @jutesmusic," the "Heart Attack" hitmaker captioned the photo. Later that day, Demi and Jute$ appeared to enjoy some time outside as she shared a picture of her new man and her dog in a car. "My boys," so the singer wrote. 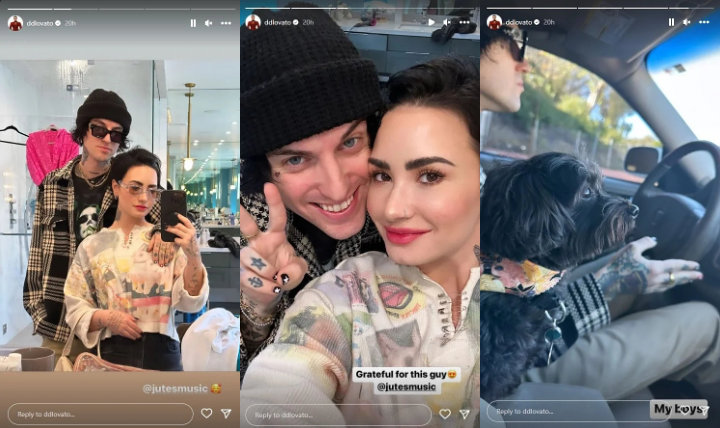 Demi and Jute$ were first romantically linked in August. At the time, a source spilled to PEOPLE about their relationship. "It's a really happy and healthy relationship," the insider said, "He's a super great guy."

A few days after the dating rumors sparked, Demi went public with Jute$ with PDA-packed sighting. The "Sorry Not Sorry" singer was photographed holding hands with her musician boyfriend while they were out and about in New York City.

By the end of August, Demi and Jute$ made their relationship Instagram official. When celebrating Demi's 30th birthday, Jute$ took to his Instagram feed to share a gushing post. "happy birthday baby. ur a 30 year old minx and i'm the luckiest schmuck in the world cuz i get to call u mine," he wrote in the post.

"making u laugh has become my new obsession cuz ur smile literally cures my depression (there's a song lyric in there somewhere) i'm so proud of u for not only surviving everything you've been through but coming out on top and becoming ur healthiest happiest sweetest self. and that's all u baby…," Jute$ continued. "i'm just here to support u and tell stupid dad jokes when needed. ur more than ur music, more than ur voice, more than a beautiful face. ur everything. i love u (sic)."

In response to the sweet post, Demi wrote, "YOURE THE BEST BOYFRIEND IN THE WORLD. I'm just so grateful I get to call you mine because I've never laughed like this in my life, I've never smiled so much and my heart is constantly so full of love with you [hearts emojis] this post, this caption… how are YOU real?! I love you honey.. so much."