The former 'Real Housewives of Beverly Hills' star claps back at a hater who hopes she would have taken a grazing shot to her neck during the terrifying incident.

AceShowbiz - Denise Richards and her husband Aaron Phypers recently survived a terrifying situation, but not everyone apparently sympathized with them. The actress has fired back at a hater who wished her harm following a road rage shooting in Los Angeles.

Someone has seemingly hoped that "The Real Housewives of Beverly Hills" alum would have taken a grazing shot to her neck in the shooting. Firing back at the troll, she sarcastically remarked on Twitter, "Thank you. I would never wish any harm on anyone."

Denise additionally wrote on Wednesday, November 16 in reply to the hater's message, which has since been removed by Twitter for violating its policy, "What I experienced yesterday with my husband,not that you care. Was the most terrifying situation I have ever been in. I'm sorry a shot didn't graze my neck…a**hole." 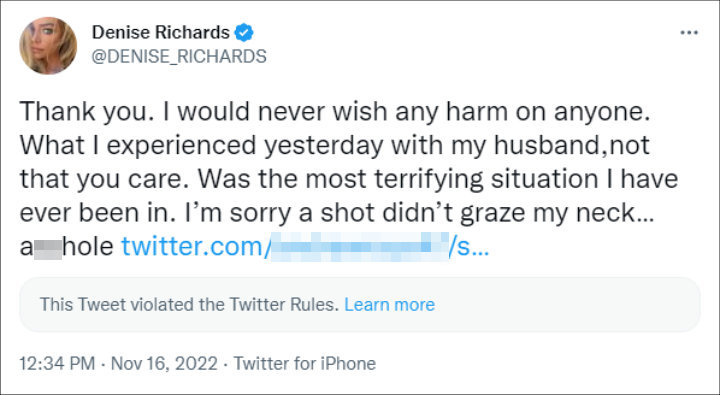 Denise Richards clapped back at a troll who wished her harm.
Editors' Pick

Denise and her husband Aaron were driving to Popsicle Studio in South Los Angeles on Monday, November 14 when the shooting happened. Aaron reportedly had some difficulties finding the place and the driver behind them was getting irritated, shouting at them while trying to squeeze in front of them. He let the guy pass, but the other driver wasn't done. That was when the other driver shot at their truck, hitting the back end on the driver's side.

Fortunately, no one was injured and the couple managed to arrive at the studio. The couple reportedly did not realize the man had shot the back of their truck until they got to the set. Denise was reportedly sobbing on the set, but remained professional and worked for 12 hours after overcoming her emotions. Aaron stayed with her the whole time.

Someone from production called 911, but it's unclear if cops came or took a report. An off-duty cop, who was on set, escorted Denise and Aaron back to the freeway after she finished filming and they made their way home safely.

Denise didn't immediately address the incident, but a source told PEOPLE that "she was very shaken up and terrified" in the aftermath of the shooting. "But she was a trooper and she went and filmed the whole day," the source added, gushing over her professionalism, "She didn't want to not show up to work."