Summer Walker Reacts to Grammys Snub: 'The Math Is Literally Not Mathing'

The 'Girls Need Love' singer takes to her Instagram account to share her response after being snubbed by the Recording Academy for the second time that got fans questioning the Academy's choices.

AceShowbiz - Summer Walker once again fails to score a nomination for the 2023 Grammy Awards. The "Girls Need Love" singer took to her Instagram account to share her response after being snubbed by the Recording Academy that got fans questioning the Academy's choices.

"And for the grammys for a 2nd time, the math is literally not mathing," the "CPR" hitmaker wrote on Instagram Story on Tuesday, November 15, shortly after the Grammys nominations were revealed.

"Atleast the streets fuq with me. Y'all always pack out every show & support everytime I drop so thanks for the love I do receive," the R&B singer continued, adding a white heart emoji.

In a separate Story, the mom of one also thanked fans for their endless love and support following the snub. "Thanks for all the overflowing love in my dm's," so she penned. 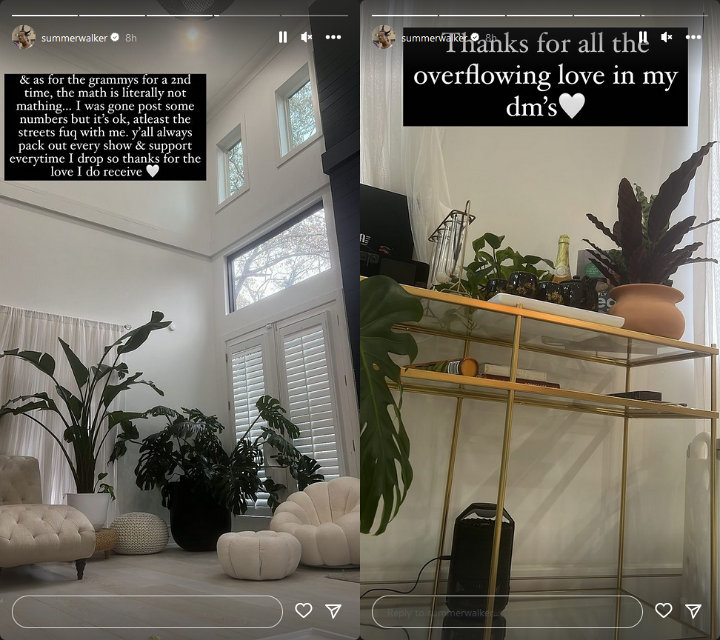 Back in 2019, Summer's "Over It" led the charts at No. 1 position. She repeated the success with her album "Still Over It" in 2021 and many believed that her latest release was a Grammy shoo-in.

Summer wasn't the only singer who was missing from the nomination list. Despite her massive success, Megan Thee Stallion was snubbed this year. Fans also wonder why Tems, whom they believe deserves a Best New Artist nod, was omitted this year.

Nicki Minaj's fans were also enraged after knowing that the self-proclaimed black Barbie was given zero nominations. Calling the Recording Academy "unfair," the Barbz slammed it for the snub while giving two nominations to Latto (Mulatto) after their heated debate over Rap category.

Last month, Nicki called out the Recording Academy for categorizing her latest hit "Super Freaky Girl" as pop, while she wanted her work recognized in rap. As it turned out, the Trinidadian rap star was blanked on her submissions in any genre. Nicki's hit "Super Freaky Girl", which samples Rick James' "Super Freak", was released on August 12. It spent 10 consecutive weeks at No. 1 on Billboard's Hot Rap Songs Chart.

Summer Walker 'Proud' After Giving Birth to Twins at Home

Summer Walker 'Surrounded by Healers' as She Prepares to Give Birth