The 'Kiss Me More' hitmaker has reached out to the new Twitter boss to help with her Twitter account as she panicked for being unable to restore her old moniker.

AceShowbiz - Doja Cat pleaded with Elon Musk to help with her Twitter account. After recently changing her screenname to Christmas, the "Woman" hitmaker has found herself unable to change it back, so directly appealed to the billionaire - who bought the platform last month - to restore her old moniker.

"Why can't i change my name on here (sic)," she first posted. "How do i change it also f*** you elon," she then wrote. "I don't wanna be christmas forever @elonmusk please help i've made a mistake (sic)."

The world's richest man promised to help but admitted he thought the 27-year-old rapper's predicament was amusing. He replied, "Working on it! Pretty funny though [cry laughing emojis] (sic)." 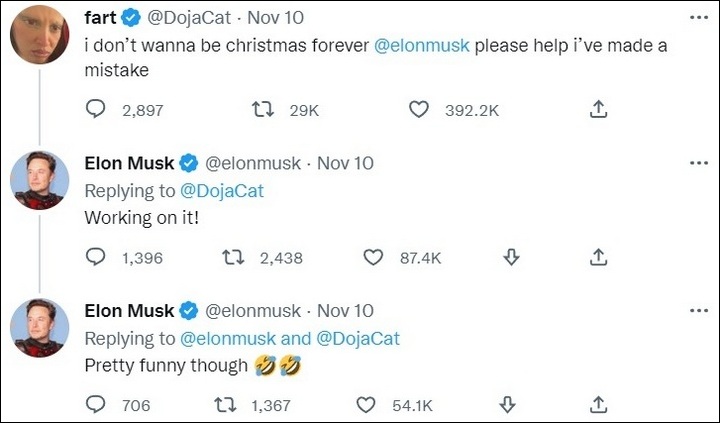 At the time of writing, Doja is still identified as Christmas on her account. Her dilemma came just days after the 51-year-old businessman warned those with verified accounts will lose their checkmarks if they change their names.

He said, "Any name change at all will cause temporary loss of verified checkmark." He also warned people impersonating others without making it obvious they are running spoof accounts will face being "permanently suspended."

He tweeted, "Going forward, any Twitter handles engaging in impersonation without clearly specifying 'parody' will be permanently suspended. Previously, we issued a warning before suspension, but now that we are rolling out widespread verification, there will be no warning. This will be clearly identified as a condition for signing up to Twitter Blue."

Earlier this week, Kathy Griffin was suspended from Twitter after she "violated the rules" of the social media app by changing her screen name to that of the Tesla boss. The message users receive when visiting her page states, "Account suspended. Twitter suspends accounts that violate the Twitter rules."

During her stint with her fake name, Kathy urged users to #VoteBlue and also look at Twitter competitor Mastodon. One of her tweets under the name change read, "After much spirited discussion with the females in my life, I've decided that voting blue for their choice is only right. (They're also sexy females, btw.) #VoteBlueToProtectWomen (sic)."