Taking to her social media platform, the 'Bodak Yellow' raptress is revealing her future plan with money she'll receive after winning a defamation case against the YouTube star.

AceShowbiz - Cardi B is getting candid about her future plan after winning a defamation lawsuit against Latasha Kebe a.k.a. Tasha K. The New York native has revealed how she's going to spend her lawsuit money as she's garnishing the blogger's property and assets.

As many wondered what "LS" actually stands for, one Twitter user replied to Cardi's initial post, "what's an LS check ? [crying emoji]." In response, Cardi wrote, "Thinkie think," along with a winking face emoji. 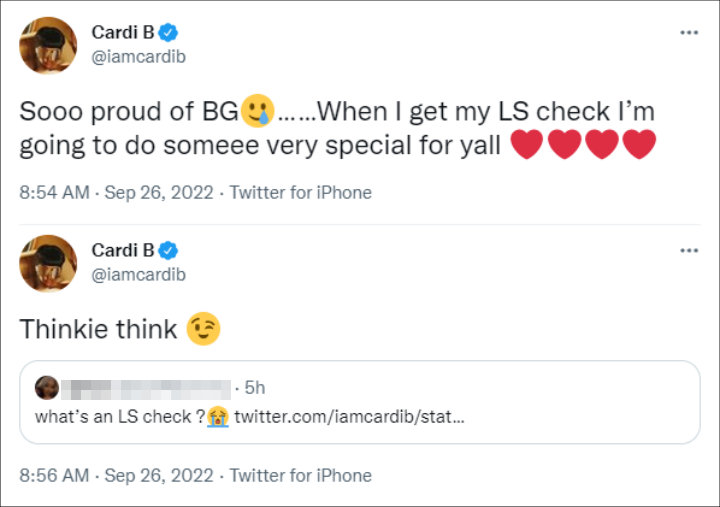 Cardi B promised Bardigang that she'll give them something 'very special' after receiving money from defamation lawsuit against blogger Tasha K.
Editors' Pick

The social media posts came a few days following news that Cardi was starting the process to seize property and assets owned by Tasha after filing to garnish the YouTube star's bank account.

According to court documents, Cardi should receive $3.3 million from Tasha, who has since moved to Africa. On September 19, Radar Online reported that the "I Like It" femcee "demanded Chase Bank and its employees hold all of Tasha's property, money, wages and other assets, including property in safe deposit boxes or similar property."

Tasha, in the meantime, rushed back to the court pleading for the federal judge who presided over the civil suit to step in. The social media personality argued the appeal is still pending and collections aren't allowed until a decision is made. She also pleaded with the court to stay the execution but the judge has yet to rule.

Tasha was sued by Cardi for defamation, invasion of privacy, and intentional infliction of emotional distress in early 2019 over the latter's claims in her vlog on "unWinewithTashaK" YouTube channel. The "Money" raptress won the case back in January 2022 with more than $2.5 million in damages and another $1.3 million in legal fees.

However, Tasha admitted that she doesn't have $4 million to be given to Cardi. "I ain't got it. Listen, I ain't got it. Don't ask me for no money," she said in February. "We have business things in place to take care of things like this. The Appellate Court and Supreme Court is in process right now," Tasha went on explaining, "What's what Appellate Court is for. Who's trying to pay $4 million?"