In some clips that circulate online, the 'GOOBA' rapper, whose real name is Daniel Hernandez, is seen furiously attacking someone and is being attacked while at the Soho Palm Club in Dubai.

AceShowbiz - 6ix9ine a.k.a. Tekashi69 has addressed videos of him getting involved in a brawl across the pond. The "FEFE" rapper appeared to play down the altercation while calling out an Instagram blogger for its misleading headline.

On Friday, September 23, Tekashi reacted to Hollywood Unlocked's post which claimed that the rapper was attacked in Dubai after a DJ refused to play his music. "I love how u guys write a whole story/essay… explain what happened and then headline it something else," he wrote in a comment. "that 69 PR hate train working overtime. DJ got smoked."

In some clips that circulated online, the "GOOBA" rapper was seen furiously attacking someone and was being attacked while at the Soho Palm Club in Dubai. The news outlet claimed that the Brooklyn rapper was outside at Dubai's Soho Palm club when he asked the DJ to play one of his songs for the club-goers.

As soon as the DJ rejected the request, the rhymer assaulted the DJ. The brawl escalated after some other people joined in to attack the hip-hop star. "A lot of lads just jumped him baddddd," a source told the news outlet.

The insider also shared that the DJ further taunted Tekashi when he hopped back on the mic. He allegedly screamed, "We don't like snitches," before laughing. He added, "No way am I playing a snitch's song."

Fans, meanwhile, trolled Tekashi online following the fight. "I may be a little old, but I don't think I heard anyone say 'turn 69 on,' " a person wrote in an Instagram comment. "Nobody want to hear his music. He knows that," someone else added. "God gon humble u real quick fam," a user hoped.

Another person, meanwhile, applauded the DJ as saying, "So Dubai did what should have been done in the states." Echoing the sentiment, another user penned, "Give that DJ a medal #WeDontCondoneRATS."

Some others claimed Tekashi deserved it after mocking PnB Rock in the wake of the latter's passing on September 12. At the time, the formerly incarcerated rapper clowned the "Fleek" spitter, who was shot at a waffle restaurant in Los Angeles, by saying, "Homie died over [waffle]," before adding a face with tears of joy emoji.

"That's what he gets for making fun of PnBRock," someone said. "With the energy that he put out he's going to have issues no matter where he goes #karma," another comment read.

6ix9ine's Ex Removes Tattoo of Him, Hazel E Says She'll Do It Next After Devon Waller Split 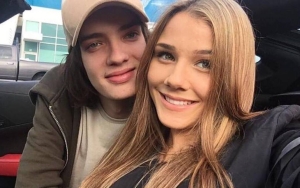