Anne Twist receives negative comments after she says she 'really enjoyed' the movie 'from start to finish' and that she's 'very proud' of her son and his filmmaker girlfriend Olivia Wilde.

On Thursday, September 22, the 54-year-old proud mom wrote in an Instagram Story, "If you can't say something nice, don't say anything at all." She added, "I'm astounded and saddened by the vitriolic comments on here to be honest. I enjoyed a film. If it's not your cup of tea don't go…If you don't like me .. please don't follow me. Simple." 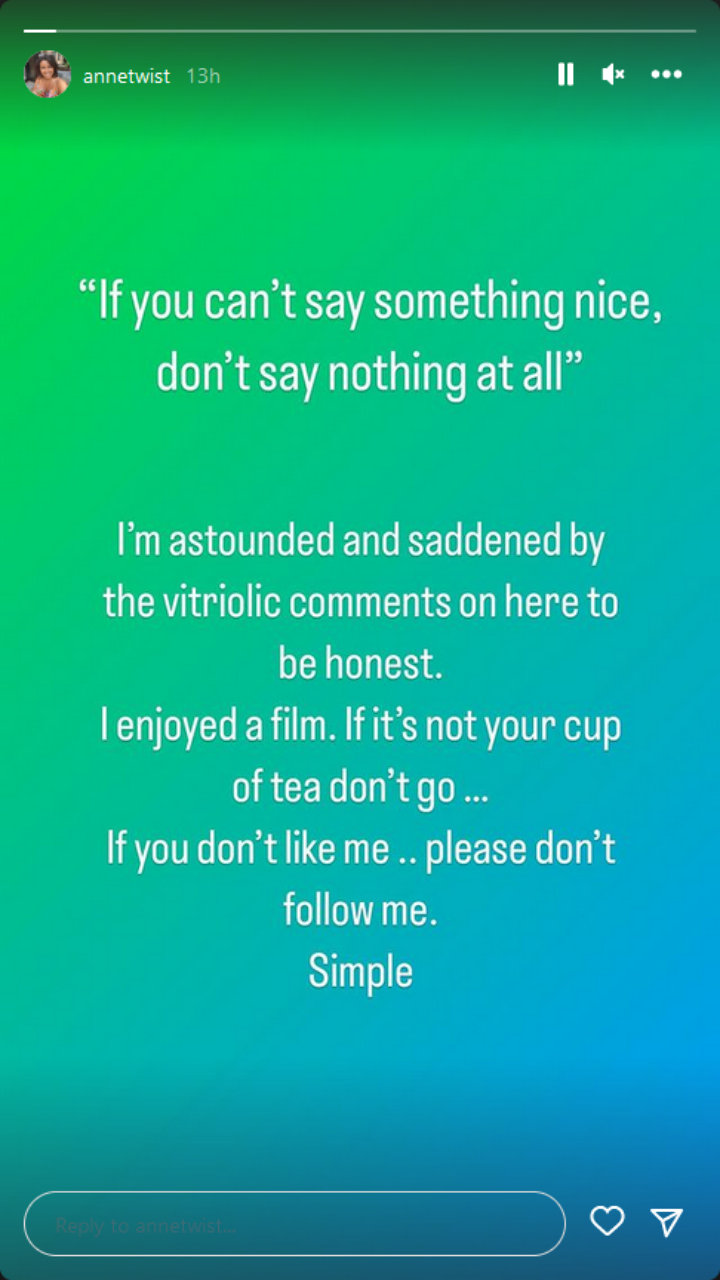 Anne's Story came after people criticized the movie in a comment section of her latest post. The said post, which saw her posing next to a huge poster of Olivia Wilde-directed film, was captioned, "First time in the French cinema .. first day showing .. 'Don't Worry Darling' you were excellent!"

Anne added, "Really enjoyed from start to finish," before gushing over her son and his girlfriend as saying, "Well done @oliviawilde and team for drawing us in, well done baby @harrystyles for being a fabulous Jack. Very proud as usual."

Anne, however, received a bunch of negative comments. "I hope If Harry acts again, can work with a better director next time! Unlike this movie, Real professional director!" one read, with another stating, "Free us from this film promoted on bulls**t just there to bait H fans and free us from its narcissistic and venal director." A third said, "Yes definitely well done to her for selling a film which is abt a woman suffering and being raped as female pleasure, and well done to her for using ur son as the last attempt to save her garbage of a career."

Ahead of the film's release, there have been speculations that its stars are having drama behind the scenes, including Olivia's alleged feud with Florence Pugh. Addressing the rumors, Olivia called the stories "endless tabloid gossip."

"I can't say enough how honored I am to have her as our lead," Olivia continued. "She's amazing in the film, and as for all the endless tabloid gossip and all the noise out there, I mean, the internet feeds itself. I don't feel the need to contribute, I think it's sufficiently well nourished."

There's also viral video footage from "Don't Worry Darling" Venice Film Festival premiere that left people on the Internet debating whether Harry had spit on co-star Chris Pine. Setting record on the speculations, Olivia told Stephen Colbert during an interview on "The Late Show with Stephen Colbert" that it's only "weird rumors."

"I think it's a perfect example of like…people will look for drama anywhere they can," Olivia added. When Stephen joked that "only time will tell" if the rumors are actually true, she reiterated, "No, he really didn't!"