The 'Spectrum' songwriter posts fake DMs that make it look like the Maroon 5 singer sent flirty messages to the music producer, while a college student claims Adam also flirted with her.

AceShowbiz - Matthew Koma is among celebrities who have weighed in on Adam Levine's cheating scandal. Poking fun at the drama, Hilary Duff's husband posted fake DMs that make it look like the Maroon 5 frontman sent flirty messages to him.

Matthew took to his Instagram Story to share a DM that Adam allegedly sent to one of the ladies he flirted with. The text read, "Holy f**k. Holy f**king f**k. That body of yours is absurd." The music producer Photoshopped the image, replacing it with a thirst trap of himself to make it seem like Adam responded to his photo. 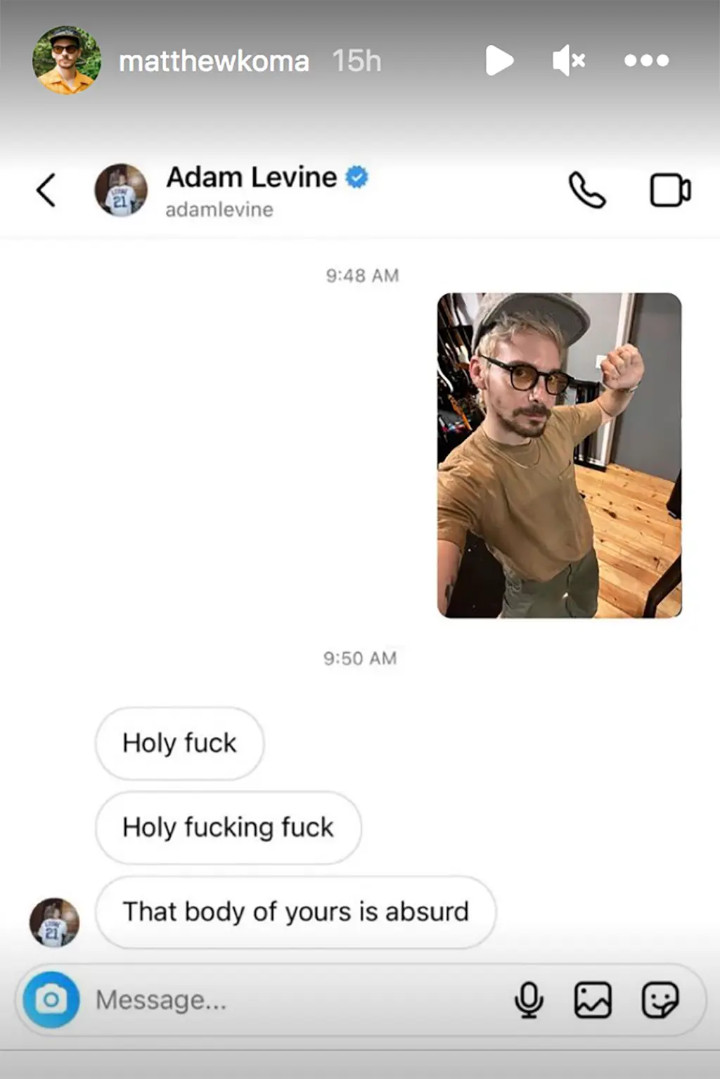 Meanwhile, a fifth woman has come forward to accuse Adam of flirting with her. A 21-year-old college student named Ashley Russell claimed the "Moves Like Jagger" singer sent her flirty messages almost daily and often replied to photos of her working out, knowing that she's still in college.

Ashley, who was 20 years old at the time, told Daily Mail she would almost immediately delete the messages after she had read them. She, however, provided screenshots of some of the messages she allegedly received from the singer, one of which read, "Nice work on legs. #commitment." She said, "He would like mainly like booty stories and would always reply with something to do with leg or booty day at the gym."

Ashley, a senior at Auburn University in Alabama, felt it was "weird" that Adam would strike up a conversation with a "random girl in college," but said she felt compelled to continue chatting to see how far he would go. She said the flirty exchanges ultimately ran dry by the end of the month after she warned the married father-of-two that he was going to "get caught" flirting with women online.

Sumner Stroh was the first woman who accused Adam of cheating on his currently pregnant wife Behati Prinsloo. The Instagram model claimed in a TikTok video that she and Adam had a relationship for about a year, when he's already married to Behati. She added that they have not talked for months now, but shared a screenshot of an alleged message sent by Adam to her in which he asked, "Ok, serious question. I'm having another baby and if it's [a] boy I really wanna name it Sumner. You OK with that? DEAD serious."

Adam later issued a statement denying that he had "an affair." He, however, admitted to showing "poor judgement" and that he "crossed the line."

Later, other women came forward with claims that Adam flirted with them. One of them was a comedian named Maryka, who posted on her Instagram Story a screenshot of an alleged conversation with the "This Love" hitmaker in which he told her, "Distract yourself by f**king with me!" Maryka also shared a video Adam sent to her in which he said, "I'm stupid," though the context in which he sent it is not clear.

Another woman named Alyson Rosef also posted a bunch of direct messages allegedly from Adam. "I shouldn't be talking to you you know (right)?" he allegedly asked in one of the messages. During another exchange, when Alyson stated she only likes metal music, the "This Love" hitmaker allegedly responded, "Said no hot chicks ever other than you."

A fourth woman, Adam's ex-yoga instructor, accused him of sending a flirtatious text to her. Taking to her Instagram Story with the hashtag #ExposeAdamLevine, Alanna Zabel claimed the "Never Gonna Leave This Bed" crooner, whom she worked with between 2007 and 2010, sent her a single flirty text while he was still romantically involved with waitress Becky Ginos, whom he dated between 2006 and 2009.

Despite his alleged infidelity, Adam and Behati have been putting on a united front. On Tuesday, September 20, they were all smiles on their first outing since the affair allegations. They stepped out together again on Wednesday, during which they showed PDA by holding hands while running errands in Montecito, California.

Charlize Theron Claims She's Not as Famous as Kim Kardashian

Male Celebs Who Slid Into Fans' DMs With Flirty Texts