Back in April, the 'Real Housewives of Atlanta' alum filed a lawsuit against the TV host and the 'RHOA' team, alleging that they ignored her complaints about years of racist remarks from her former co-star, Kim Zolciak-Biermann.

AceShowbiz - NeNe Leakes is seemingly ready to bring Andy Cohen down. The former star of "The Real Housewives of Atlanta" has hinted that she'll air out the "Watch What Happens Live" host's dirty laundry amid claims she's "blacklisted" for telling the truth.

Making use of her Twitter account on Wednesday, August 10, the 54-year-old reality star let out scathing messages. She first tweeted, "They stop every job opportunity that comes my way."

In a following post, NeNe added, "I am happy I was able to help all the other black women get job opportunities that are working for them. He stopped me from working because I was a threat to his career! Yet he was able to abuse me for years," seemingly aiming at Andy. She continued, "I want to release these voice recordings so bad," without revealing any further details or insight.

The reality TV star also changed her Twitter bio, where she made more claims, alleging that she was "blacklisted," and continued to insinuate that she has "receipts." Her new bio on the blue bird app now reads, "BLACKLISTED FOR TELLING THE TRUTH & NOT WANTING TO BE ABUSED ANYMORE! RECEIPTSSS." 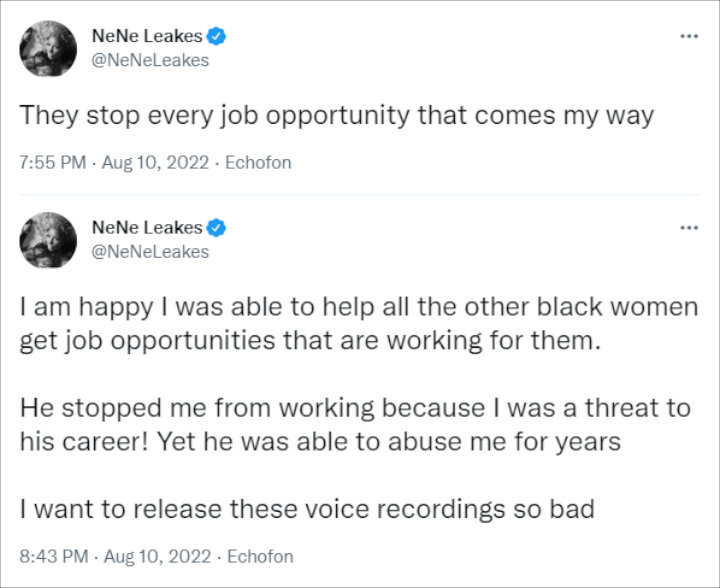 NeNe seemingly confirmed her tweet was directed at Andy when she reposted a tweet that mentioned the Bravo boss by name. "Andy used you until he wanted to kick you to the curb and then slander you so you couldn't obtain any further work. It's so disappointing and it is definitely different than how he treats other housewives he disagrees with or has parted ways with," a fan argued. She retweeted the message, adding, "They stop every job opportunity that comes my way."

Then, when a netizen told NeNe to stop going after Andy, arguing that no other "Housewife" has an issue with him, she retweeted a fan who pointed out that "The Real Housewives of Potomac" star Monique Samuels has also complained about the 54-year-old TV host.

In April, NeNe filed a lawsuit against Andy and the "RHOA" team. In the paperwork, NeNe alleged that the team ignored her complaints about years of racist remarks from her former co-star, Kim Zolciak-Biermann.

NeNe claimed in 2012 during the fifth season, Kim made "racially offensive and stereotypical" comments about her and Kandi Burruss, calling her neighborhood a "ghetto." At the same year, Kim reportedly used the N-word to refer to the "Glee" alum and other black housewives in a dispute.

According to the docs, the execs also tried to stop NeNe from showing her support for the Black Lives Matter movement by keeping her off episodes where the housewives addressed the matter. "As the Black Lives Matter movement swept our nation, Mrs. Leakes - Bravo's historically most successful Black female talent - should have been embraced by NBC, Bravo, and True," the suit said. "Instead, NBC, Bravo, and True forced her out of the 'house she built,' denying her a regular role."