The frontman of Guns N' Roses calls out the 69-year-old Russian president in a candid social media post as he thanks fans for showing support for the war-torn country.

AceShowbiz - Axl Rose has slammed Vladimir Putin as a "callous, lying, murderous little man." Months after the 69-year-old Russian president launched an ongoing military invasion on Ukraine, the Guns N' Roses frontman took to Twitter to thank fans for showing their support for the war-torn country as he finished up the European leg of his latest tour with his heavy metal band in Germany.

"I'd like to thank everyone for showing such love and support during the tour for the people of Ukraine," the 60-year-old tweeted, "and their noble and horrifying fight for freedom against an increasingly totalitarian regime ran by a callous, lying, murderous, little man with outdated ambitions and no regard for human life." 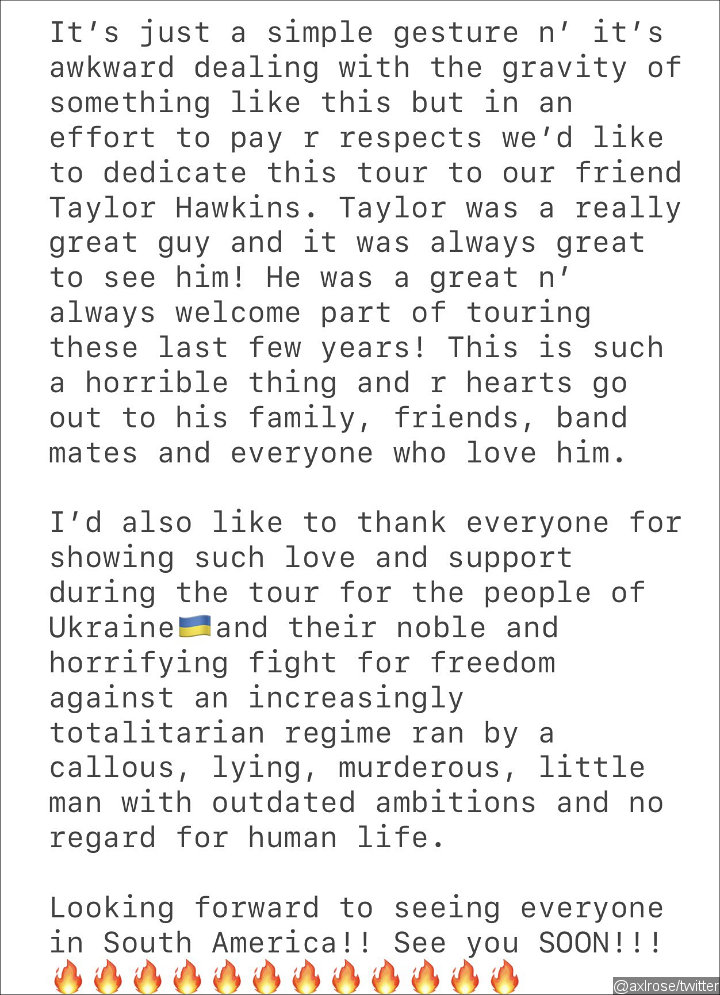 The "Sweet Child O' Mine" rocker, who has served as the lead vocalist and lyricist of the heavy metal band since its inception back in 1985, went on to pay tribute to fellow star and Foo Fighters drummer Taylor Hawkins, who was found dead at the age of 50 back in March 2022.

Axl, whose real name is William Bruce Rose Jr., added, "It's just a simple gesture n' it's awkward dealing with the gravity of something like this but in an effort to pay r respects we'd like to dedicate this tour to our friend Taylor Hawkins."

"Taylor was a really great guy and it was always great to see him! He was a great n' always welcome part of touring these last few years! This is such a horrible thing and r hearts go out to his family, friends, band mates and everyone who love him (sic)," he continued expressing his condolences.

Axl Rose Explains Song Choice at Lisa Marie Presley's Funeral: It Was Her Request Before Death