The pregnant Barbadian singer is spotted backstage at the Smokers Club Festival in Los Angeles where her soon-to-be-baby daddy takes the stage as a headliner.

AceShowbiz - Rihanna stays by A$AP Rocky's side amid his legal trouble. The pregnant singer has supported her boyfriend at his first concert since his arrest for his alleged involvement in a 2021 shooting.

On Saturday, April 30, the Barbadian beauty was spotted backstage at the Smokers Club Festival in Los Angeles where her soon-to-be-baby daddy took the stage as a headliner. She seemed to be in good spirits as she was reportedly rapping alongside her boyfriend.

Rih, who was surrounded by security backstage, dressed her baby bump in a matching maxi dress and coat. In a picture shared a fan, the 34-year-old flashed a smile and a V sign as she posed next to the male fan at the concert. 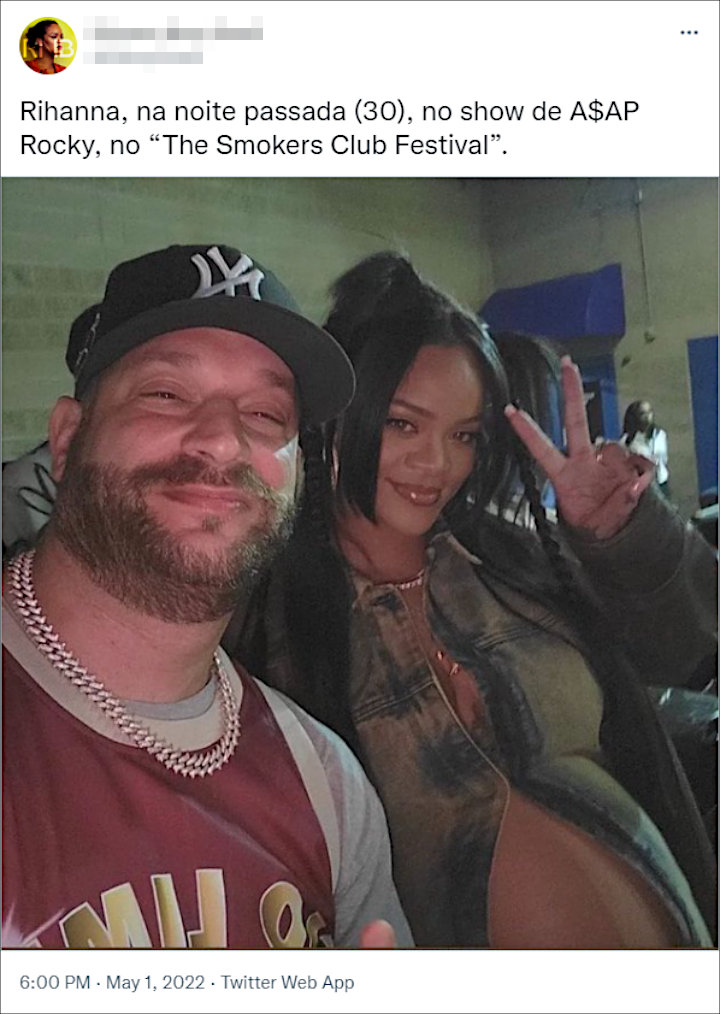 Rihanna took a picture with a fan at the Smokers Club Festival.

Rocky, meanwhile, wore a white T-shirt for the show with the Parental Advisory label printed across the chest, and black sweats with metal detailing.

Rocky was arrested on April 20 for assault with a deadly weapon in connection with a shooting last November in Hollywood. The rapper, whose real name is Rakim Athelaston Mayers, is accused of shooting at an alleged victim three to four times near Vista Del Mar and Selma Avenue on November 6 around 10:20 P.M. following an argument. The victim sustained a minor injury from the incident and later sought medical treatment.

The LAPD detailed the arrest via Twitter. "Early this morning, LAPD officers arrested Mayers for assault with a deadly weapon (firearm) at the Los Angeles International Airport," read the tweet. "The case will be presented to the Los Angeles County District Attorney's Office for filing consideration."

He was released shortly after posting a $550,000 bail. The cops also executed a search warrant at Rocky's house where they reportedly found several firearms, but none of the guns were connected to the crime. They also determined that the guns were "lawfully purchased and legally registered."

However, the LAPD reportedly has in their possession a video of the shooting, presumably from a surveillance camera. If the footage is clear enough, it could be used as evidence that incriminates the 33-year-old star.

Rihanna 'Obsessed' With Her Baby Boy