Supporting Sexual Assault Awareness via her social media account, the 'Bodak Yellow' raptress presses on breaking the stigma by reminding fans that 'the shame is not yours to carry.'

AceShowbiz - Cardi B utilized her platform to advocate about an important issue. Through her social media account, the "WAP" hitmaker urged parents to encourage their young children to be honest if they experience any sexual assault.

On Thursday, April 21, the mother of two wrote a series of tweets to mark the Sexual Assault Awareness Month, and pointed out the importance of parental guidance on the issue. "Also parents we can't forget our children. There are sick people everywhere, daycare, schools, you name it," she tweeted, "Make sure you teach them from a [sic] early age, no one is to touch your private parts & never be afraid to tell mommy & daddy when someone makes you uncomfortable."

Cardi B stressed the importance of parental guidance on the issue.

Cardi's tweet prompted another user to share further advice for parents. "Also teach them secrets are not good, no matter how small. Sadly fam/friends can tell them it's our secret [and] since they close they think it's ok," one noted, "No secrets ever!! Also make sure u don't use that word either with them so they know secrets are bad and [should] be told."

The "I Like It" femcee responded in agreement to the reminder. She tweeted back, "Yeup! That's how they manipulate kids." 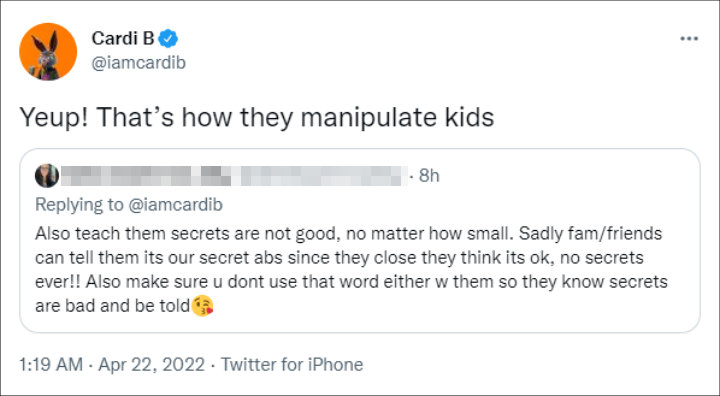 Another user shared her advice for parents.

Before reminding parents, the 29-year-old raptress also talked about consent and encouraged fans to open up about their experience. She stressed in her tweet that "no means no." She continued by writing, "It's [sic] doesn't matter what you wear, it doesn't matter who you are, male or female. For anyone going through this, the shame is not yours to carry… it's the monsters who do this."

Cardi B encouraged fans to open up about their sexual assault experience.

Sexual Assault Awareness is an annual campaign that takes place every April. According to National Sexual Violence Resource Center, its aim is to spread "both awareness and prevention of sexual assault, harassment, and abuse." Furthermore, the goal is to bring light to an issue that people are not aware of.