The 'TWINNEM' hitmaker has also taken to her Twitter page to react to people trolling her over the reported low sales figures of her debut album 'Trendsetter'.

AceShowbiz - Coi Leray's debut album "Trendsetter" is about to reach 11K sales in its first week. Instead of being supportive, her dad Benzino laughed at it.

He allegedly reshared DJ Akademiks' post regarding the album's sales. Alongside a screenshot of Akademiks' tweet, the "Love & Hip Hop: Atlanta" star wrote, "[Crying laughing emojis] if she had track wit @iambenzino I woulda listened @coileray."

Upon learning of the post, several fellow musicians jumped to Coi's defense. Defending the "TWINNEM" hitmaker, Tory Lanez wrote, "I'd never laugh at my daughter .. type of s**t is that?"

Tank, meanwhile, commented, "I'm gonna say he was hacked cause as a dad this is never the way..[praying hands emoji]." Echoing the sentiment, The Game added, "That's your daughter n***a !!!! Smfh."

"Don't let this distract u from tha fact that Coi didnt inherit any of his envious, haten & korny ways !!!!! She also has a neck !!!!! her daddy kant even spell NECK," Malibuu Miitch chimed in.

Coi herself has reacted to people trolling her over the reported low figures of her album's sales. "God has been the best father to me. I can't complain about anything," she wrote on Twitter on Wednesday, April 13. "My debut album is amazing and not one song can you say is bad." 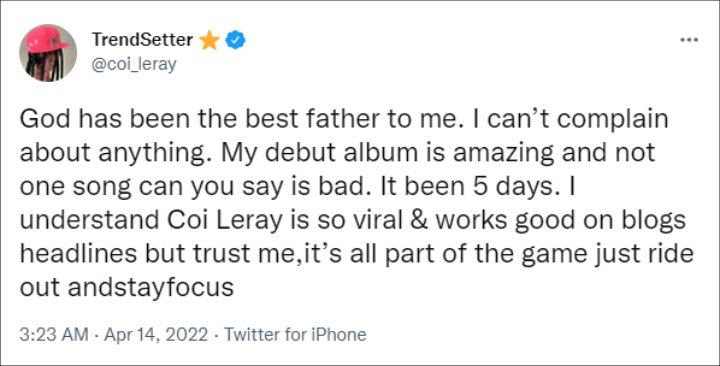 "It been 5 days. I understand Coi Leray is so viral & works good on blogs headlines but trust me,it's all part of the game just ride out andstayfocus," she added.