In a new social media post, the model insists that he is 'not guilty' while sharing that his 'wonderful' agents 'had to let him go' following his alleged physical altercation with the former Miss USA.

AceShowbiz - Shanna Moakler's ex Matthew Rondeau has divulged how his arrest has affected his career. Taking to his social media platform, the former Playboy Playmate's ex-boyfriend revealed that he has been ditched by his agents following his domestic violence arrest.

On Tuesday, March 1, the 29-year-old model took to his Instagram Story to tell his followers that he was dropped by his agents. "Thankyou everyone who called and harassed all my wonderful Agents everyday to the point that they had to let me go," he began.

"I hope you feel really good about yourself when you ALL find out I'm NOT guilty," Matthew continued in his post, maintaining his innocence. He further said, "[I'm] f**king pray that Karma doesn't crawl right up your a**. Lol," adding a laughing with tears emoji. He concluded his post by saying "goodnight" along with a face-blowing kiss emoji. 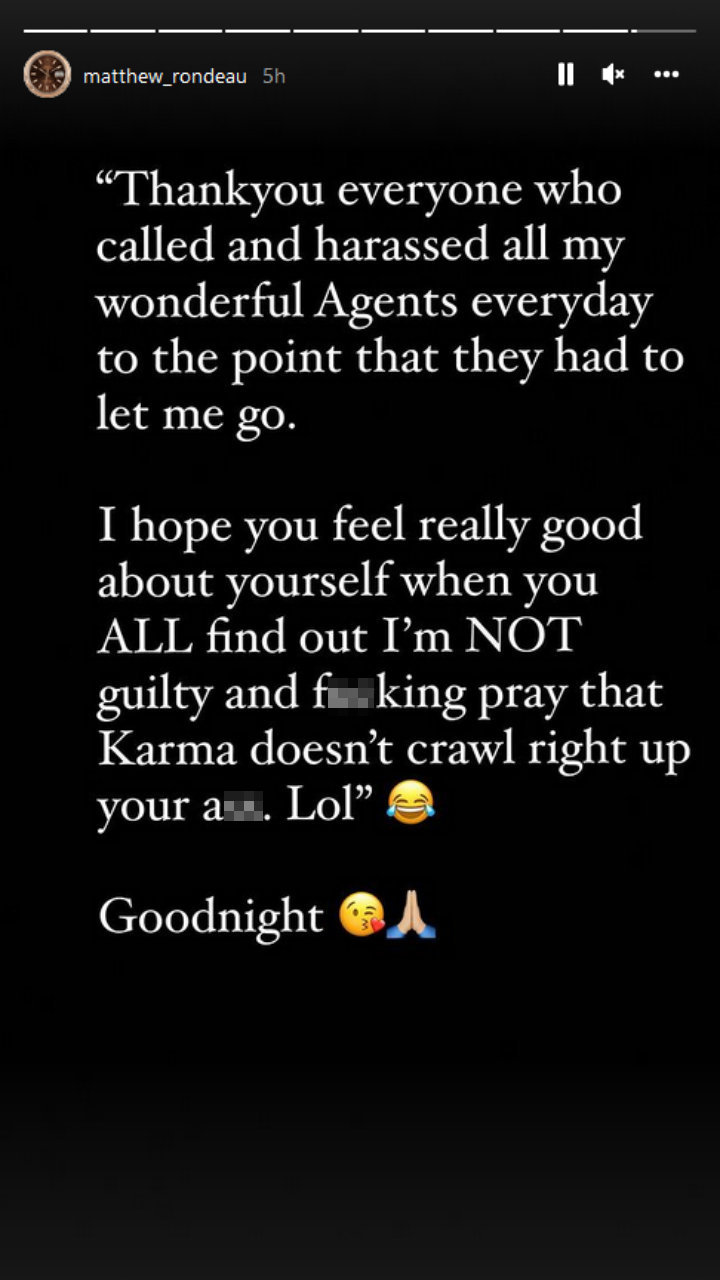 Matthew Rondeau revealed that has been dropped by his 'wonderful' agents following his domestic violence arrest.

Earlier that day, Matthew told Radar that he won't be trying to fix his relationship with Shanna. "I will never speak to her after what she is putting me through," he said, referring to the backlash that has followed him after his arrest. "Would you go back to someone who put you through this for fame?" He even admitted that he had blocked her from contacting him via phone and social media.

"I never hit her or beat her," Matthew claimed. The model added, "I'm an innocent man going through the toughest obstacle of his entire life so far," stressing that he "would never harm her or anyone" as he "doesn't have that fiber in [his] body." He continued, "I am not a woman beater. Period. I love and respect women."

Matthew later revealed that he "wanted a family and a life with her." He shared, "I love her and wanted to spend my life with her. I can't believe this is happening. I would never harm the woman I want to call my wife."

Following the allegations, Matthew said that he and his family are receiving death threats. He unveiled that strangers are saying "the worst things" to him and those related to him. He went on to tell the outlet that he's going to "need therapy" for all the "trauma" he's going through over the alleged crime he insists he "did not commit."

Matthew was taken into police custody on February 24. The domestic violence arrest came after he had an argument at Shanna's property due to her alleged infidelity. Matthew himself publicly shamed his ex on Instagram.

More recently, it's reported that Shanna was granted an emergency protective order against Matthew. In documents obtained by Us Weekly, a police officer detailed the alleged fight between the former couple. "[Rondeau] grabbed victim by the hair, [swinging] her by hair on the ground," the officer said, before noting that Matthew later "grabbed [Moakler's] face and neck, threw chair at victim and urinated on [her], leaving visible injuries."

Officers on the scene also stated in the report that firearms were seized. The order is valid for seven days until March 3 morning. This means Matthew is prohibited to "harass, attack, strike, threaten, [or] assault" Shanna by that time. He is also ordered to stay at least 100 yards away from the former Miss USA and move out of her house immediately. His court date is set for June 23.