In a statement via her representative, the former Miss USA says that she is now being surrounded by her family and friends after her boyfriend was taken into police custody.

AceShowbiz - Shanna Moakler is doing good after her boyfriend Matthew Rondeau was arrested for domestic violence. In a statement via her spokesperson, the former Miss USA assures her fans that she is "okay."

"I wanted to let everybody know that I'm okay and thank you for your love and support," said the season 3 contestant of "Celebrity Big Brother" on Thursday, February 24. She added, "I'm surrounded by my family and friends."

Shanna's daughter Alabama Barker also took to her Instagram Story to share an update on her mom's current situation. "Just texted my mom! I'm not sure what happened on her live [sic]," the 16-year-old girl wrote, "I'm in contact with her & she is okay," adding a red heart emoji. She concluded her message, "That man needs serious help!" 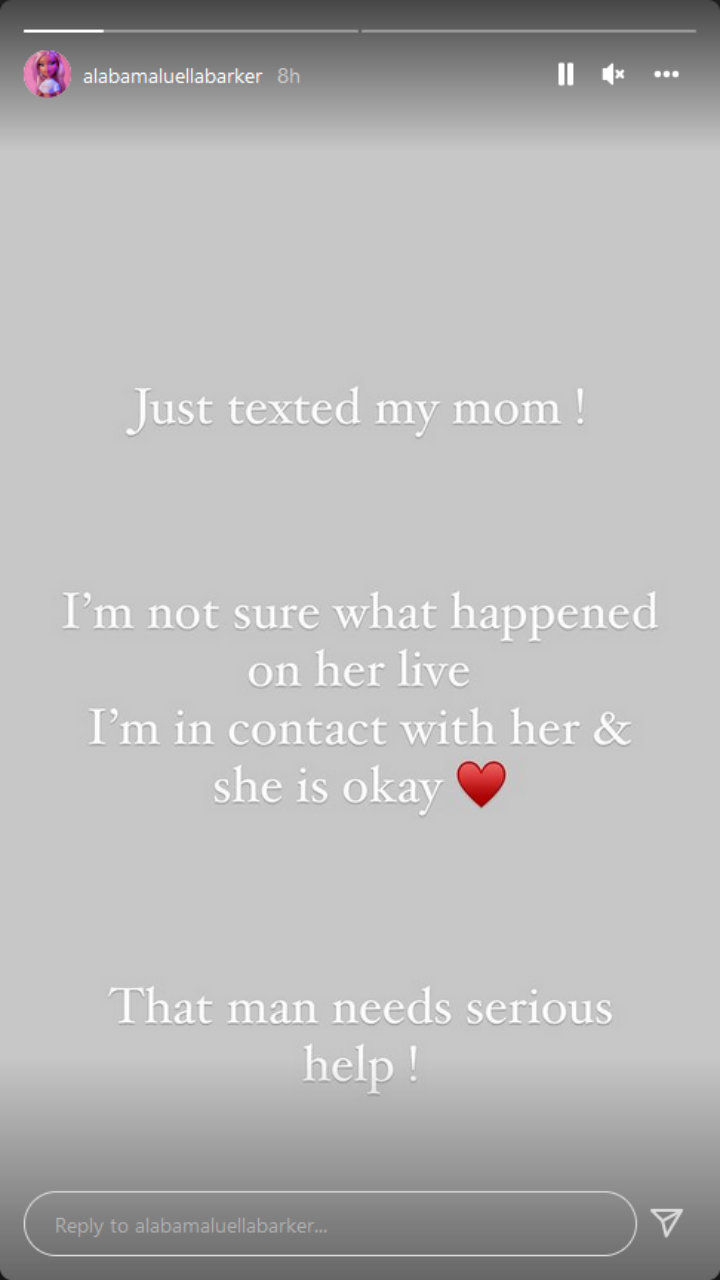 Shanna's manager, David Weintraub, also said in a statement that the reality TV star is grateful for her fans after the "horrible incident unfold[ed] on social media." The CEO of DWE Talent added, "Thank you to everyone calling with concern about Shanna. She is OK and survived this traumatic experience. Thankfully, the police saved her from harm's way and she is doing fine. At the moment, she asks that she is given her space to adjust to life after this trauma."

Following the incident, Shanna was spotted out in Los Angeles. In photos circulating online, the 46-year-old bare-faced model appeared looking slightly untidier than her usual glamorous style. She could be seen wearing a cropped red cable knit sweater and a pair of oversized blue-and-white sweatpants.

Matthew was arrested on Thursday morning following a heated argument with Shanna that turned physical. The police took Matthew into custody after they noticed visible marks on the former pageant beauty's body. His bail is currently set at $50,000.

The arrest came after Matthew launched into expletive-laden tirade against Shanna. "So, it's over, K? Oh lord is f**king right, so record me now because this is done," he fumed. "I'm done. I'm never talking to this f**king specimen of a f**king human again. The truth is I found out that she was talking to other f**king people the whole entire time in our relationship."

Matthew also claimed that Shanna isn't over her ex-husband Travis Barker yet. "We have a laptop that we f**king share together. My name pops up in the f**king laptop; this f**king a**hole is talking to her exes," he alleged. "She ain't over f**king Travis, she ain't over anything."

Vicki Gunvalson Gushes Over 'Perfect' and 'Incredible' New Boyfriend: 'It's Been Like Disneyland'