In a couple of tweets, the 'Westworld' star calls the 'Mystic River' actor 'a jibbering fool' and 'tragic' for saying that men who wear skirts have 'cowardly genes.'

AceShowbiz - Thandiwe Newton (formerly known as Thandie Newton) has weighed in on Sean Penn's controversial take on "feminized" men and she didn't mince her words. Responding to the "Licorice Pizza" star's comments that men who wear skirts have "cowardly genes," the actress called him "a jibbering fool" and "tragic."

"@SeanPenn Dude what are you SAY-ING??" Thandiwe wrote on Sunday, January 30, linking it to a Variety article about Sean's remarks. "Like for REAL? You're a jibbering FOOL. MF you used to be sexy but now you're just tragic."

The "Westworld" star said that she felt sorry for Sean's daughter Dylan Penn, who was present during her father's interview. "In front of your DAUGHTER!?" so the Emmy Award-winning actress said of the 30-year-old, whose mom is Robin Wright. She added, "That poor little mite. Thank God her Mum's so dope. Please stop ruining the brilliance of #LicoricePizza with this nonsense." 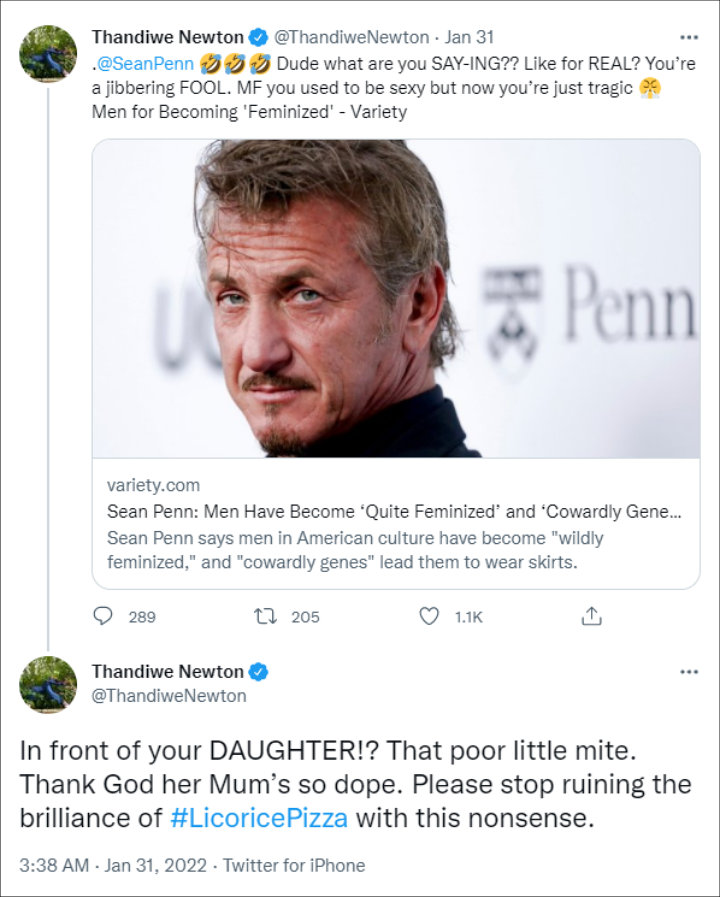 Sean first shared his view on gender in an interview with U.K. outlet iNews. The Oscar-winning actor said he saw "there has been an absence of male behavior." He then elaborated, "I am in the club that believes that men in American culture have become wildly feminized."

"I don't think that being a brute or having insensitivity or disrespect for women is anything to do with masculinity, or ever did," he stressed. "But I don't think that [in order] to be fair to women, we should become them."

In a following interview with The Independent, Sean was asked to explain this view of his. "I think that men have, in my view, become quite feminized," he reiterated his earlier statements.

"I have these very strong women in my life who do not take masculinity as a sign of oppression toward them," so he claimed, before attacking men who wear skirts, "There are a lot of, I think, cowardly genes that lead to people surrendering their jeans and putting on a skirt."

According to the news outlet, Sean's daughter Dylan, who worked with him on "Flag Day", looked uncomfortable when he uttered the word "quite feminized."

He quickly received backlash from social media users, with one saying, "@SeanPenn Doesn't know that being feminized IS a sign of strength. Weak men beat their wives. Right Madonna? Feminized men are strong and SEXY as hell. Right Harry [Styles]?" Another added, "Okay think what you want #SeanPenn thing is an opinion such as yours is misogynistic, at what point in our humanity and life on the spinning rock we call home did we decide that pants are purely masculine?"

Sean has not responded to the criticism.

6ix9ine Gets Into Heated Argument With Anuel AA's Brother