The 'Westworld' actress, who has been rumored dating 23-year-old musician Lonr. following split from her husband, is spotted entering and leaving a marijuana dispensary in Malibu.

AceShowbiz - Thandiwe Newton (previously known as Thandie Newton) seems to be numbing her pain with weed amid her personal issues. The English actress has been caught visiting a cannabis store in Malibu following split from her husband Ol Parker.

The 49-year-old was spotted stopping by marijuana dispensary High Tide in the Californian city in pictures obtained by Daily Mail. The Maeve Millay of HBO's series "Westworld" was seen holding a green apple, which had been partly munched, and carrying a paper bag when leaving the store.

Weed is legal for recreational and medicinal purposes in Malibu. Meanwhile, High Tide "aims to provide the highest quality, organic, lab-tested cannabis products," according to its official website.

For the solo outing, Thandiwe, who has been rumored dating musician Lonr., sported a fleece and khaki cargo trousers with a white-and-red sneakers. She wore her braided hair in a half-up, half-down style and sported a black cap. She also carried an animal print bag. 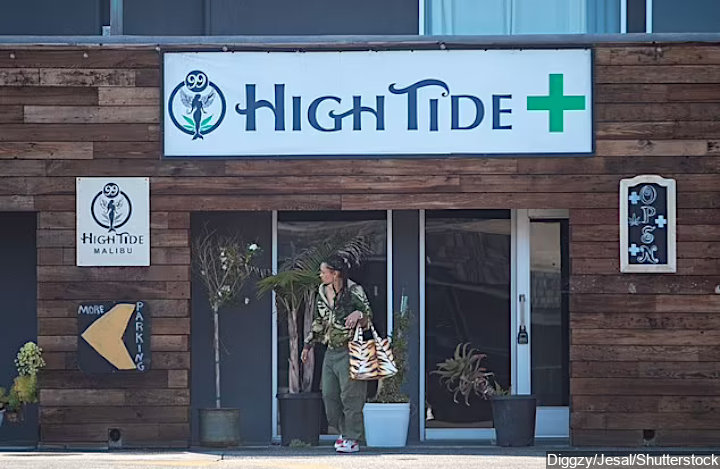 Thandiwe Newton left a cannabis store in Malibu amid her personal issues.

Thandiwe has been going through a turbulent period in her life after she abruptly exited "Magic Mike's Last Dance" and following her split from her husband of 24 years, Ol Parker. It was reported last month that she was urged to seek mental health support, which she resisted despite her friends and agent's growing concern about her well-being.

A source told Page Six, "She fired her U.K. agent of three decades, and then her U.S. agent Gaby Morgerman flew in from Los Angeles to try to calm things down." The source explained, "Thandiwe's team wants her to go to rehab for mental health support. She was supposed to leave immediately for a facility, they tried for a Malibu rehab, but they couldn't take her. Arrangements are now being made to go to a facility in Arizona if she agrees to go."

A source on set added, "Thandiwe had been acting strange on set, she has been very highly strung. Her apparent breakdown caused so much disruption, it became clear she couldn't play the role." The insider further claimed that "there's a lot going on" in the actress' personal life following the separation from her former spouse. "She seemed so stressed she even brought her two pet rabbits to her hotel for emotional support," claimed the informant.

Meanwhile, Thandiwe has fueled her romance rumors with Lonr.. On April 23, they were photographed cuddling and kissing passionately during an outing in Malibu, California, marking their first public appearance together amid the dating rumors.

Lil Duval Claims Someone Photoshopped His Butt in Viral Pic

Pusha T Earns First No. 1 Album on Billboard 200 Chart With 'It's Almost Dry'