In a joint statement released via their respective Instagram Story, the three 'Sex and the City' actresses express their solidarity to the alleged victims of the Mr. Big depicter.

AceShowbiz - "Sex and the City" mainstays have spoken up on sexual assault allegations against their co-star Chris Noth. On Monday, December 20, Sarah Jessica Parker, Cynthia Nixon and Kristin Davis finally broke their silence on the matter by releasing a joint statement via their respective Instagram page.

"We are deeply saddened to hear the allegations against Chris Noth," read the identical message posted on the three actresses' Stories. "We support the women who have come forward and shared their painful experiences. We know it must be a very difficult thing to do and we commend them for it." 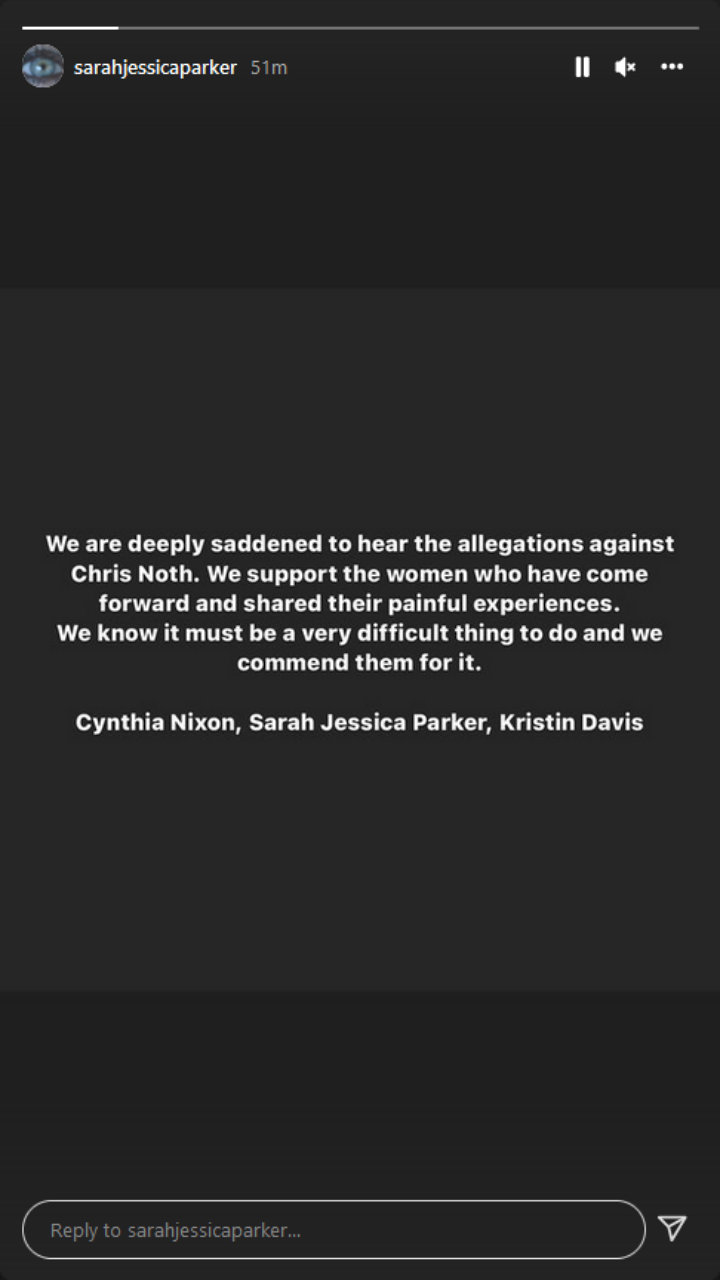 Sarah Jessica Parker and her 'Sex and the City' co-stars released a statement on sexual assault allegations against Chris Noth.
Editors' Pick

The statement was issued several days after The Hollywood Reporter published an article on the allegations against Chris. According to the news outlet, one of the woman said she was assaulted at his apartment in West Hollywood in 2004 and the other at his Greenwich Village home in 2015.

Chris has denied the accusations, insisting that their "sexual encounters" were all consensual. Meanwhile, actress Zoe Lister-Jones accused him of being "drunk" and "sexually inappropriate" while on the set of "Law & Order". She additionally called him a "predator" in an Instagram post.

Later, a third woman came forward with a similar experience with the 67-year-old star. The 30-year-old, who goes by the alias Ava to protect her privacy, claims she was sexually assaulted by the actor in October 2010, when she was 18 years old and working as a hostess and lounge singer at a restaurant in Manhattan.

Recently, Chris reprised his role as Mr. Big, the husband of SJP's character Carrie Bradshaw, on "SATC" revival "And Just Like That...", but his character was killed off in the first episode. He then starred in a Peloton ad made in collaboration with Ryan Reynolds. The ad has since been pulled from the air following the sexual allegations against "The Good Wife" alum.

Chris Noth Fired From 'The Equalizer' After Sexual Assault Allegations