The 'Harry Potter' author once again comes under fire after she likes an article criticizing Scottish police for allowing rape suspects to self-identify as female.

AceShowbiz - J.K. Rowling isn't afraid of causing controversy, even after facing backlash several times for her transphobic comments. The famed author has once again landed in hot water for wading into the debate about transgender issue by criticizing Scottish police for allowing rape suspects to self-identify as female.

On Sunday, December 12, the "Harry Potter" author shared a link to an article from The Times of London titled " 'Absurdity' of police logging rapists as women." In the article, the writer wrote, "Police Scotland said that they would log rapes as being carried out by a woman if the accused person insists, even if they have not legally changed gender."

Rowling then sarcastically tweeted along with the link, "War is Peace. Freedom is Slavery. Ignorance is Strength. The Penised Individual Who Raped You Is a Woman," referencing "Newspeak" in George Orwell's "1984". 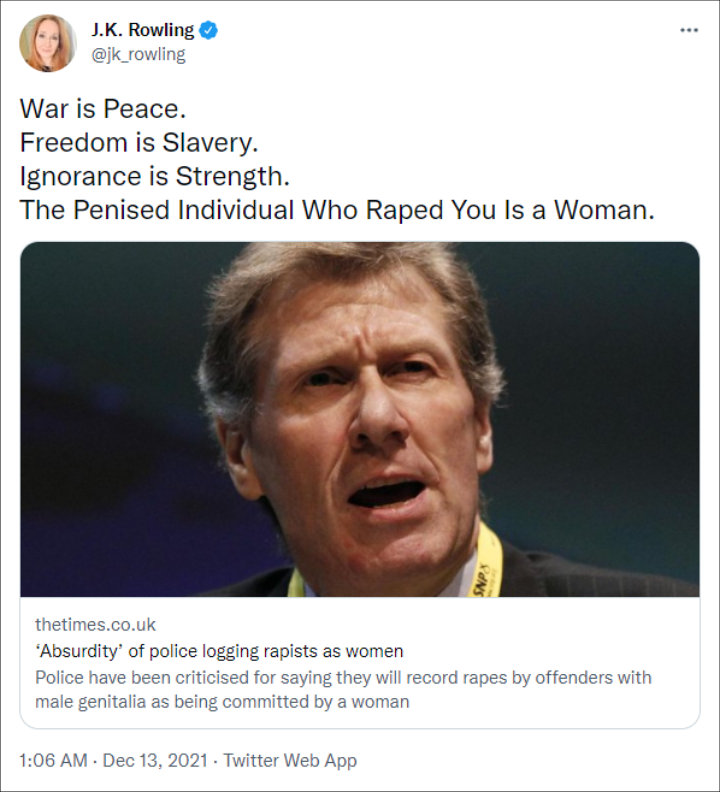 Many quickly took issue with Rowling's tweet, with some people likening her to her "Harry Potter" character Dolores Umbridge, who is known for her demeaning attitude. "Imagine inventing as reprehensible a character as Prof. Umbridge and then deciding to be her forever," one person remarked.

A former fan also alleged that the author has turned into her character, "As a former fan of yours, someone who has been long inspired to pursue writing as a result of your work, I cannot put into words how disappointing it is that you've chosen to make hatred your main goal in life now. Congrats, Ms. Rowling - you've become Umbridge."

Some others called out Rowling for perpetuating false narrative that trans women are predators. "Trans women are not a danger to society. J.K Rowling loves to fuel hate towards a whole group of innocent beautiful people," someone wrote.

Another slammed the Brit, "You literally have a castle and you spend your time doing this." One other critic tweeted, "The breadth of violence *against* trans folks is extreme. Violence against women--ALL women, including lesbians, bi and trans women--is perpetrated 91% by cis-het men. Stop using your platform to misrepresent the facts of male violence--a global pandemic."

YouTuber and trans activist Kate Blaque chimed in, "As a survivor and a trans woman, it will always upset me how seemingly desperate people are to establish transgender women as inherently sexually predatory in a world that views us as un-rapeable."

"As a survivor of sexual assault, I'm outraged that J.K. Rowling has once again used her enormous platform to cause harm and to conflate transgender identity with rape," trans journalist and activist Dawn Ennis also told Yahoo Life. "As a writer, I'm gobsmacked that Rowling would categorize rape as something that only involves a penis."

Rowling previously spoke against an article using the inclusive phrase "people who menstruate," which recognized that not every person who experiences a period identifies as female. "I'm sure there used to be a word for those people. Someone help me out. Wumben? Wimpund? Woomud?" she wrote at the time.

Britney Spears Claims She 'Hated' Her 2003 Interview With Diane Sawyer