Meanwhile, Kourtney's sister Kim Kardashian reveals that she has hired pianist Philip Cornish to 'wake up her kids every morning with Christmas music.'

AceShowbiz - Kourtney Kardashian is more than excited to welcome Christmas this year. The former "Keeping Up with the Kardashians" shared on her Instagram account on Sunday, December 12 some throwback pictures of her celebrating the holiday when she was a child.

One of the pictures saw young Kourtney trying to receive a gift from a Santa Claus. Her mom Kris Jenner and her late dad Robert Kardashian were also featured in the picture.

Other snaps featured her little sister Kim Kardashian. The sisters looked extremely adorable as they were twinning in a red dress with green Rudolph the Red-Nosed Reindeer on it which they paired with a white long-sleeved top underneath.

In several others, Kim and Kourtney were delighted as they were handed presents by Santa Clause himself which was their father, Robert Kardashian, who rocked a Santa suit and huge fake white beard. "Daddy Santa," the Poosh founder wrote in the caption.

Kourtney wasn't the only who was already in the holiday spirits. Kim revealed on her own page that she hired pianist Philip Cornish to "wake up her kids every morning with Christmas music" for the entire month of December.

Alongside a video of her stunning Christmas tree, the KKW Beauty founder wrote in an Instagram Story, "Good morning! Every morning during the month of December @philtheykeys comes to play Christmas music on the piano to wake up the kids." In another video, the pianist could be seen performing in the corner of the room for her kids, North, Saint, Chicago and Psalm, whom she shares with estranged husband Kanye West.

Upon catching wind of Kim's posts, Porsha Williams applauded Kim. "Love This !! They will remember this forever," so the former "The Real Housewives of Atlanta" star wrote in an Instagram comment. "Life has its own problems, parents should do the best they can at creating a peaceful environment they can retreat to beautiful job Kim & Ye," one fan added.

"Wow I would do this if I was rich. It's keeping the Christmas spirit alive," another user commented. Meanwhile, someone thought it was such an over-the-top action as she could have just asked "Siri to Play Christmas music." 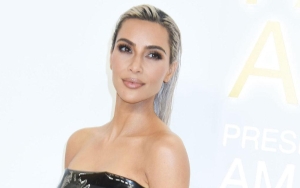