Thanking Governor Stitt and others who used their voice to save Julius, the 'Keeping Up With the Kardashian' star notes that he was in his position because he hung out with the wrong crowd.

AceShowbiz - Kim Kardashian is celebrating after her efforts to save Julius Jones' life paid off - Oklahoma Governor Kevin Stitt has canceled the prisoner's execution just in time on Thursday, November 18.

Kim, who is training to become a lawyer, is a regular advocate for convicts she believes are innocent and the reality star worked hard to persuade top state officials to commute Jones' death sentence to life in prison. He was convicted of murdering a man in 1999 but has insisted for 20 years he did not commit the crime.

And just four hours before his scheduled 4 P.M. execution, Stitt shared the news in a statement, writing, "After prayerful consideration and reviewing materials presented by all sides of this case, I have determined to commute Julius Jones' sentence to life imprisonment without the possibility of parole." 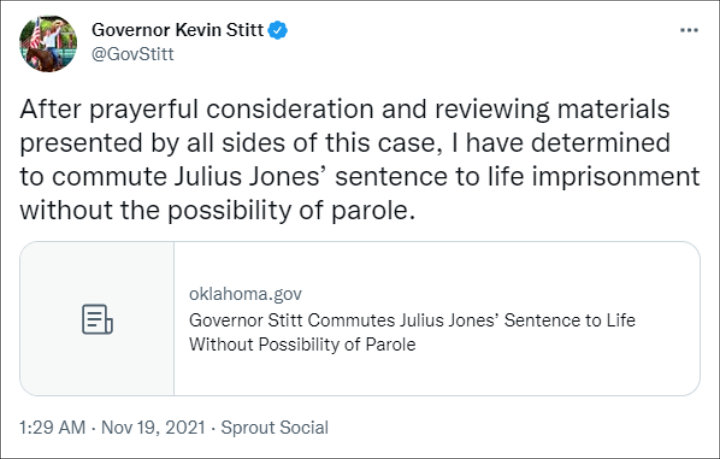 Kim was quick to take to Twitter, writing, "Thank you so much Governor Stitt for commuting Julius Jones' sentence to life without parole and stopping his execution today. I spent most of my day on the phone with Julius yesterday in between his lawyer meetings and family visitation which still are not contact visits. Meaning he cannot still hug his family members before being executed. He hasn't in over 20 years."

The star also revealed Jones refused the anxiety medication he was offered ahead of his scheduled death, because he insisted he had "a clear conscience" and was at "peace knowing he is innocent..."

"He also wanted me to pass a few messages along that were really important to him," she continued. "The most important is that you have to always make sure you are doing the right thing."

"Julius was hanging out with the wrong crowd and that landed him in the position he's in today. He said if you are doing something your mom wouldn't approve of then you shouldn't be doing it. It's that simple!"

"I'm so grateful to everyone who used their voice and helped to save Julius' life today. Thank you to the parole board and Governor Stitt."

Kim concluded her message with prayer and heart emojis. 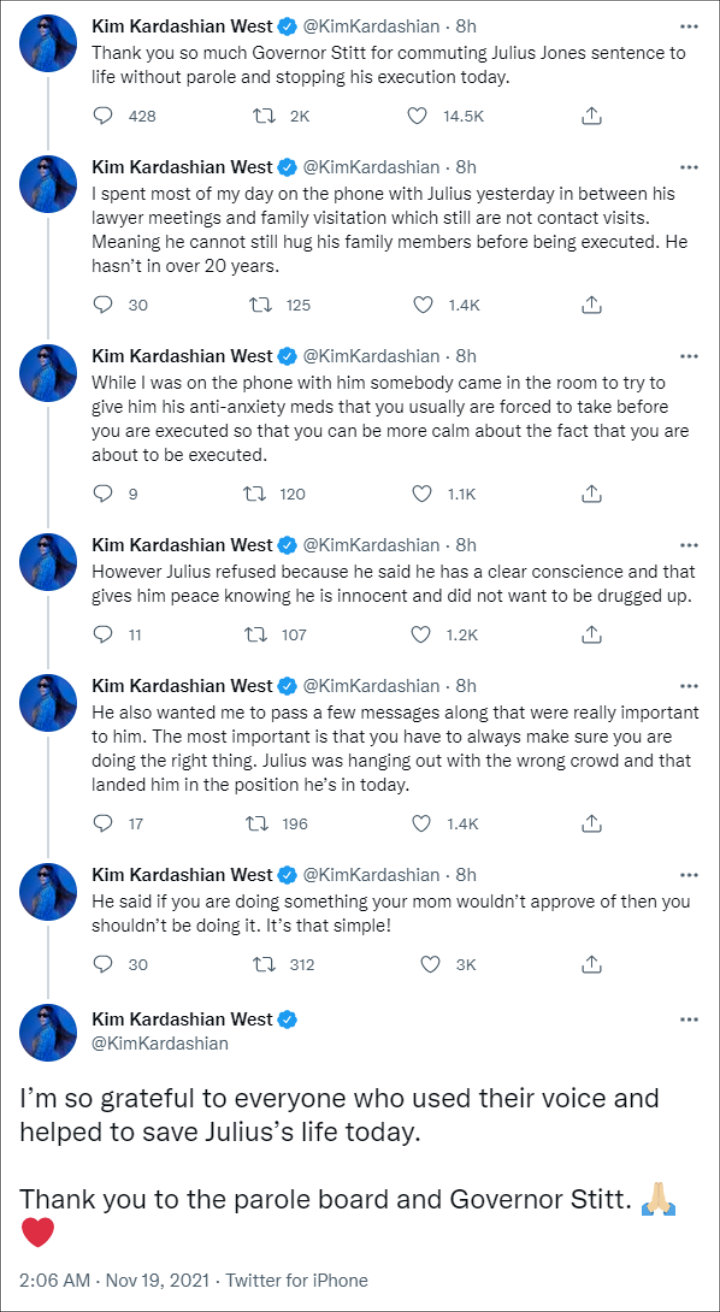 She's not the only big name who was campaigning to keep Jones alive. In 2008, Viola Davis produced a documentary about his case, while Sir Richard Branson, American football star Baker Mayfield, and Sister Helen Prejean - the nun and social justice activist depicted by Susan Sarandon in "Dead Man Walking" - also advocated for Julius.