In response to a since-deleted rude comment underneath her latest twerk video, the 'Rumors' artist reminds a hater all the good things that she is promoting in her big platform as a celebrity.

AceShowbiz - Lizzo popped off in recent posts on her Twitter account. The "Rumors" artist took to the blue bird app to shut down a hater in a series tweets in which she also complained about the fake love around her.

In response to a since-deleted rude comment underneath her latest twerk video, Lizzo reminded the person all the good things that she is promoting in her big platform as a celebrity. "I promote meditation, plant based nutrition, flexibility & strength by performing high energy choreography for 90mins straight, body confidence," the singer/rapper clapped back at the troll.

In a separate tweet, the 33-year-old vented about fake love and the overwhelming hate comments directed to her. "Sometimes I wonder why I still do this s**t--the love feels fake these days and the hate is way too real," she shared. 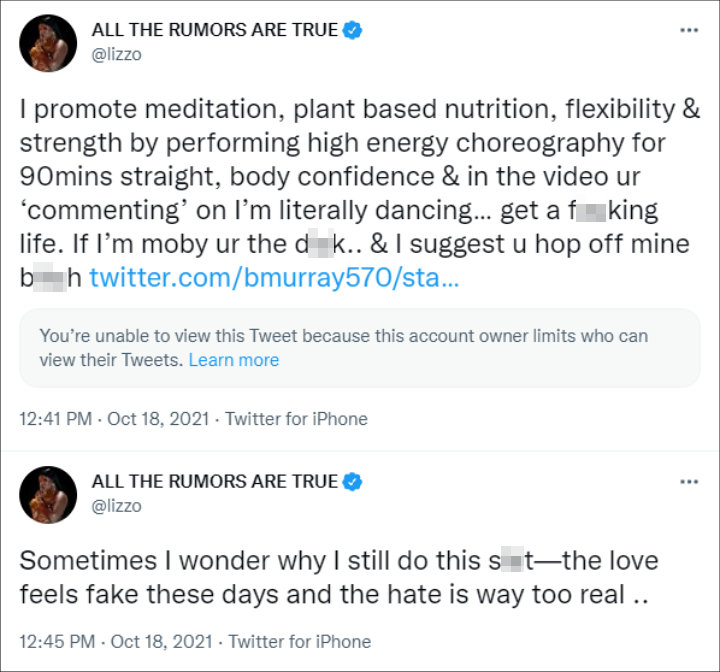 The posts arrived after Lizzo was criticized for her racy dress while attending Cardi B's birthday party earlier this month. For the dancehall-themed bash at LA River Studios on October 11, the "Truth Hurts" hitmaker sparked online chatter as she donned a crystal-covered, totally see-through purple mesh dress with nothing underneath except for matching pasties and a thong.

Lizzo, however, wasn't really bothered by the criticism and decided to further taunt her trolls by mooning her viewers during an Instagram Live session on October 14. During the live streaming, Lizzo, whose real name is Melissa Viviane Jefferson, pulled down her pants to show her bare butt to the camera.

She then began twerking it without any accompanying music. Not stopping there, the musician also slapped her own derriere several times before pulling her pants back up and told her audience, "Kiss my fat black a** b***hes. Okay!"

Lizzo Hangs Out With 'BFF' BTS at Harry Styles' Concert in L.A.