The Batman Solves The Riddler Puzzle in First Gritty Trailer

The newly-unveiled official footage also sees Robert Pattinson's Batman hell-bent on revenge and chasing after Colin Farrell's The Penguin as Gotham is ravaged by crimes.

AceShowbiz - The first full trailer of "The Batman" is finally here for viewing pleasure. Debuted during DC FanDome over the weekend, the video, which has now also been made available online, shows Robert Pattinson's gritty take on the DC superhero.

The video opens with a hint of the presence of The Riddler, portrayed by Paul Dano, in the city as he is being arrested by Gotham City police in a cafe. The man, whose face is not seen, leaves a question mark design on the coffee.

Batman later explains the meaning of the Bat-Signal to Jim Gordon (Jeffrey Wright). "Fear is a tool. When that light hits the sky, it's not just a call. It's a warning," he says as the captain stands near the Bat-Signal and looks up at the sky, seemingly waiting for the vigilante.

Batman then faces a group of thugs sporting face paint like Joker's before he visits an inmate, who claims he's been trying to reach to the superhero. Getting emotional, Batman punches the window that separates them as he demands to know, "What have you done?"

In a chilling voiceover, The Riddler gives Batman a puzzle to solve as he asks, "What's black and blue and dead all over?" The Caped Crusader later seems to realize the threat posed by The Riddler as he says, "This city is a powder keg, and Riddler's the match."

But The Riddler isn't the only villain that Batman is facing as he's also seen chasing after The Penguin (Colin Farrell) in a high-octane action scene. His Bat Car emerges from explosion and quickly bumps into The Penguin's.

The dynamic between Batman and Catwoman (Zoe Kravitz) also takes center stage in the video, as the latter tries to warn the former that things will only get more dangerous for him. Seemingly disregarding his safety, he declares himself as "vengeance."

Matt Reeves directs the film that is said to explore Batman's early year of fighting crime. It also stars John Turturro as a Gotham crime lord, Peter Sarsgaard as Gotham D.A. Gil Colson, and Andy Serkis as Alfred among others. Written by Reeves and Peter Craig, the movie is set for release on March 4, 2022 in the United States. 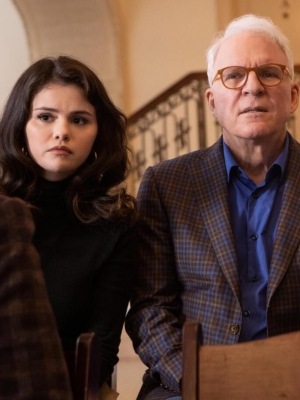