Weeks after calling it quits with 'Flip It Like Disick' star following his Instagram DMs drama involving Kourtney Kardashian, the model posts a quote about letting go on her social media platform.

AceShowbiz - Amelia Hamlin may have some words to say following her breakup with Scott Disick. The daughter of Lisa Rinna and Harry Hamlin shared a cryptic quote about letting go weeks after she ended her relationship with the "Keeping Up with the Kardashians" alum.

On Wednesday, September 22, the 20-year-old beauty took to her Instagram Story to repost a quote that read, "The longer you entertain what's not for you, the longer you postpone what is." The post continued, "Read that again." 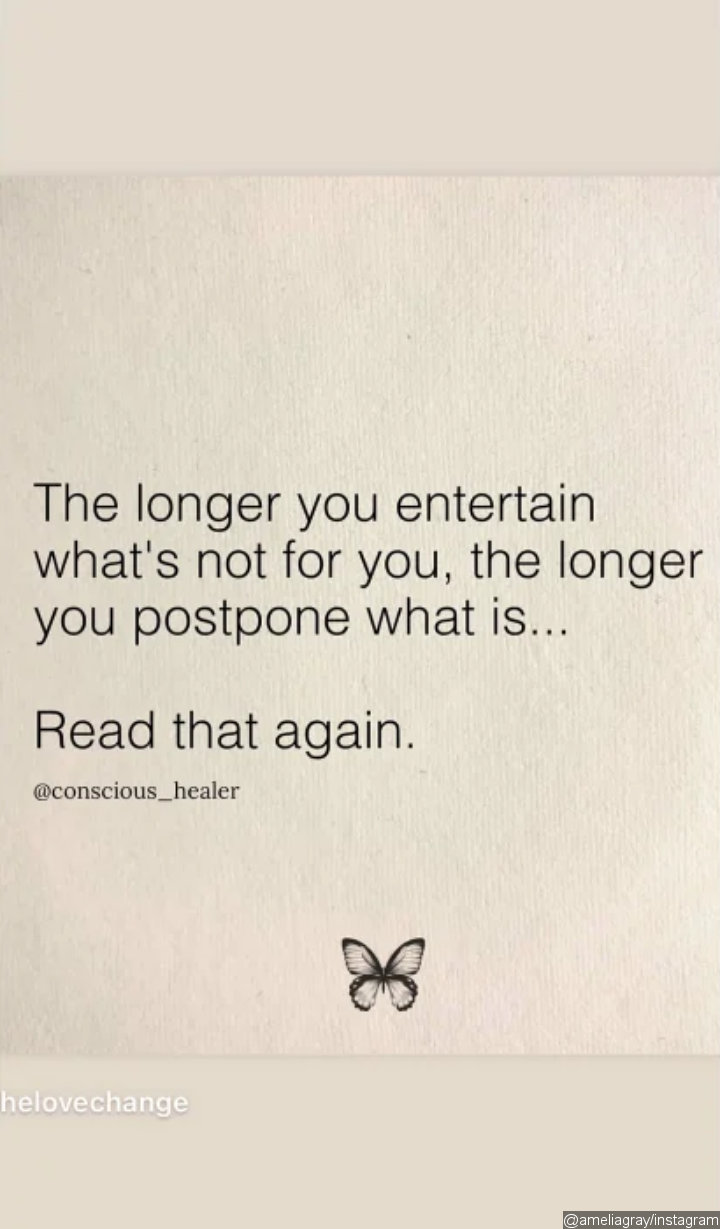 Amelia Gray shared a cryptic post on her Instagram Story weeks after breaking up with Scott Disick.

Amelia didn't share any caption or commentary on the quote, but it wasn't the first message she shared that alluded to her recent breakup. Earlier this month, she sparked split rumors from Scott when she posted an intriguing quote online.

"Never settle for less," the message she shared on September 7 read. "Not with your jobs, your friends, and especially not with your heart. Continue to seek what you are looking for and do not shrink yourself for the sake of other people. You deserve the best." Over the quote, she added a short caption, "This is it."

Shortly after, the news of their split broke. Multiple sources confirmed that they were no longer together following Scott's Instagram DMs drama involving his ex-girlfriend Kourtney Kardashian.

"Amelia broke up with Scott over the weekend. Scott agreed that he feels he needs to be single right now," a source spilled to E! News. "They had a lot of fun together but it was never going to be a long-term relationship."

A separate source claimed that Amelia "is done with Scott for now." Amelia allegedly "wants to be strong and to move on. She had had enough and it was time. Her friends are all rallying around her and supporting her through this. Everyone knows she deserves better. She knows it too."

When Amelia's mom Lisa heard about the split, she seemingly couldn't hide her joy. "The Real Housewives of Beverly Hills" star, who once hoped Amelia dated Harry Styles instead of Scott, left a single smiling emoji underneath Instagram fan account's Queens of Bravo post about the breakup.

Moneybagg Yo Spoiled With $1.5M and Nearly 30 Acres of Land on His 30th Birthday