The 21-year-old model daughter of Lisa Rinna looks nervous and is seen trying to reassure herself that it's okay to say goodbye to her thick heavy brows during the makeover.

AceShowbiz - Amelia Hamlin is never afraid to go extra for her modeling career. The daughter of Lisa Rinna and Harry Hamlin has bravely shaved off her freshly-bleached eyebrows for a photo shoot.

On Thursday, October 6, the 21-year-old beauty turned to her Instagram Story to share her experience with her fans and followers. She first uploaded a photo of Gillette shaving gel and a blue shaver. She captioned the image with a face with a peeping eye emoji and a face with hand over mouth emoji.

In a following Story, Amelia added a video of her looking nervous while sitting on a chair during the dramatic makeover for Interview Magazine. She could be seen trying to reassure herself that she was making the right decision by repeatedly chanting, "Okay, okay, okay, okay."

A woman could ultimately be seen removing her thick heavy brows with a razor. The ex-girlfriend of Scott Disick showed off her flawless complexion as she went bare-faced, apart from Gillette's shaving cream over both eyebrows. "Only 4 u @melzy917 [Interview Magazine Editor-in-Chief Mel Ottenberg] & fashion of course," she captioned the recording. 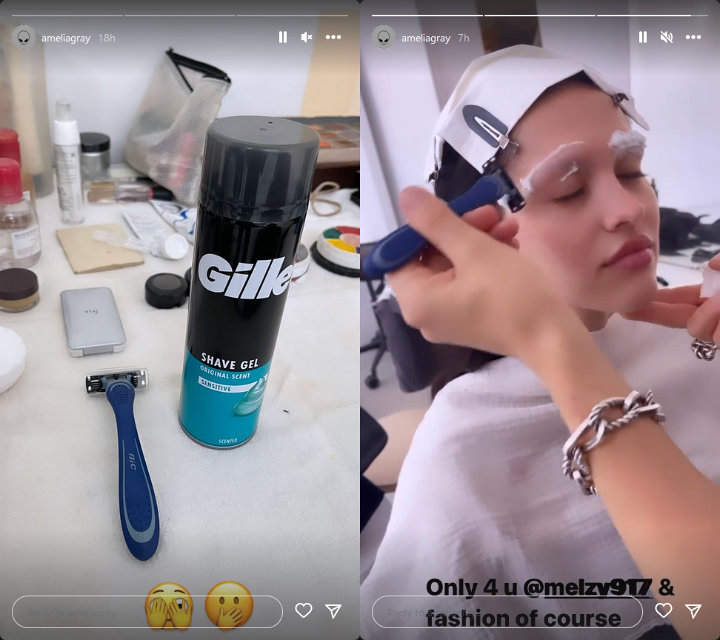 Amelia's new drastic makeover came just days after she showed off fake silver piercings on her face and bleached eyebrows before walking the runway for Balenciaga during Paris Fashion Week.

Amelia flaunted her edgy makeup look in a TikTok video she uploaded on Sunday, October 2. She had pointed piercings around her eyebrows along with two rectangular piercings directly above the bridge of her nose. She also had a few additional lip piercings to complete the edgy look for the runway show.

Following the show, Amelia posted numerous behind-the-scenes photos, before admitting to balling her "eyes out" from joy over the opportunity to walk the runway. "IM SO CONFUSED. IM SO GRATEFUL. IM SO IN SHOCK. I DONT KNOW WHAT IS GOING ON RIGHT NOW. BUT ALL I KNOW IS I AM F**KING OBSESSED WITH YOU @demna @balenciaga," she captioned her post.

"I FOUND OUT THAT I GOT THIS SHOW AT THE EXACT MOMENT THAT I WAS BEGGING TO SIT FRONT ROW TO WATCH THE BEAUTY. I DONT KNOW HOW I GOT HERE. BUT I DO KNOW THAT IM REALLY REALLY FUCKING GRATEFUL," Amelia continued. "IM SORRY FOR THE PROFANITY BUT ITS ALL I HAVE FOR YOU RIGHT NOW. IM NOT DONE. THANK YOU FOR MAKING MY DREAMS COME TRUE. WHAT THE F**K. THANK YOU EVERYONE WHO BELIEVED IN ME AND THIS MOMENT."