According to her dad and actor Rob Schneider, the 'Baby Outlaw' songstress gives birth to her first child weighing 8.1 pounds after experiencing 'two very big losses.'

AceShowbiz - Elle King can officially add mother to her resume. After suffering two "very big losses," the "I Told You I Was Mean" singer welcomed her first child with her fiance Dan Tooker on Wednesday, September 1.

Announcing the exciting news was Elle's father and "The Hot Chick" actor Rob Schneider. "THE WORLD JUST GOT 8.1 POUNDS BETTER!! CONGRATULATIONS ELLE AND DAN!!" the 57-year-old comedian shared on his Instagram page, seemingly revealing the newborn is a baby boy as he added an image of a blue stroller. He expressed his excitement as saying, "LOVE, GRANDPA ROBBIE." However, he already took down the post as Elle herself hasn't confirmed the birth. 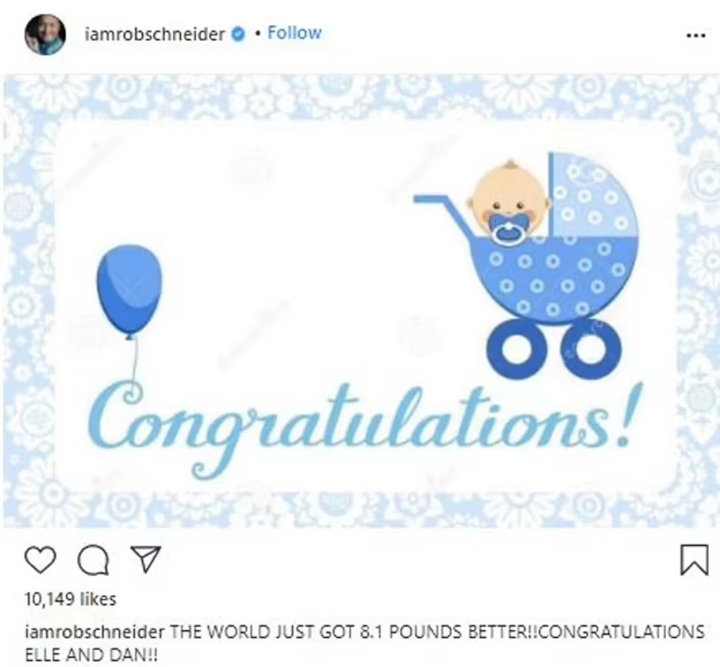 Elle first made public that she was expecting a baby with Dan back in March. At the time, the 32-year-old singer/songwriter took to her Instagram account to share a photo that saw her and her fiance posing while holding the ultrasound image of their unborn baby. In the caption, she wrote, "Well, we did something! Me and @tattooker made a little human! We are very excited to share the news that we are pregnant."

Elle admitted that she had "a great deal of fear" when sharing her pregnancy to the public. On the reason why, the Los Angeles native said, "This miracle baby comes after two very big losses." She continued, "It's a terrifying and extremely painful experience for everyone. But the sun always rises, and I never really let go to let the universe decide when I was ready."

"I remember every pregnancy announcement felt like a dagger to me," Elle shared. "I'm telling you, our babies come. And I love you. What women go through on this journey make us nothing less than WARRIORS. So thank you for your prayers and love for our high-risk pregnancy!"

Fast forward to July, Elle praised Dan for taking care of her during the pregnancy. "He's the love of my life, he also literally carries me up the stairs every night, washes my hair, combs it and bathes and dries off the lower half of my body," the musician gushed at the time. "Thank you to @tattooker for being a good sport and such a dream at taking care of me through this pregnancy!!!"

Brad Pitt on Following Style Trends: It's Too Exhausting