The actor known for his portrayal as Sam Winchester on the fantasy series launches the online fundraising campaign to support Holli DeWees' family after she died of breast cancer.

AceShowbiz - Actor Jared Padalecki has launched an online fundraising campaign to support a "Supernatural" fan's family after her death. The kind star, who played Sam Winchester on the U.S. series from 2005 to 2020, wants to make sure superfan Holli DeWees' family is taken care of.

Padalecki announced the GoFundMe.com campaign for the loved ones Holli left behind when she died of breast cancer on Twitter on Monday, August 9. "Hey y'all. As some of you may have seen, one of our own #SPNFamily members has recently passed away from a brave battle with cancer [sic]," he wrote. 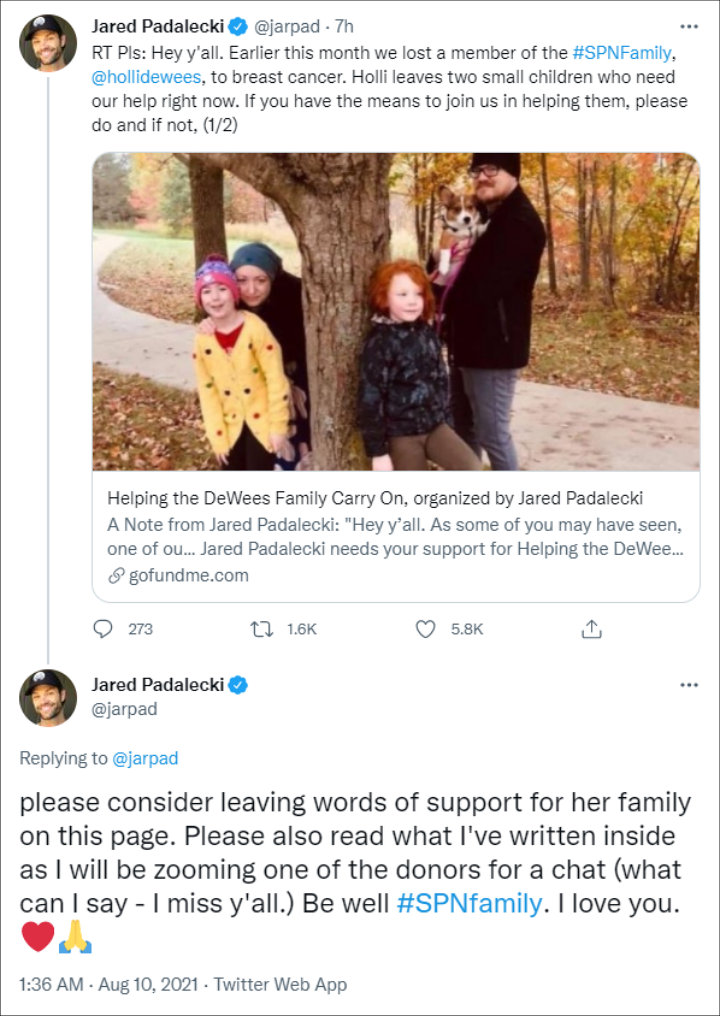 Noting Holli was a longtime volunteer for the nonprofit group The Random Acts of Kindness Foundation, he continued, "She worked to make so many lives better, and now we have an opportunity to take up her mantle and provide some help to the most important people in her life - her kids."

One of the prizes will be a Zoom call from Jared, who now stars in western TV series "Walker" on U.S. network The CW.

"To that end, I will be calling one person via Zoom who donates $10 or more to this fundraiser," the 39-year-old noted in the GoFundMe page for the DeWees family. "Once you have donated, please go to here to enter your name for a chance to be randomly drawn. You can enter once a day, and we will be keeping this open through August 16th*."

In a tweet raising awareness of the campaign, the husband of Genevieve Cortese pleaded with fans, "please consider leaving words of support for her family on this page. Please also read what I've written inside as I will be zooming one of the donors for a chat (what can I say - I miss y'all.)" He concluded, "Be well #SPNfamily. I love you."