Responding to an Instagram photo of them in a 1982 TV movie, the 'Sex and the City' co-stars share their wish that they had a copy or a photo of their 'Little House in the Big Woods' recording session.

AceShowbiz - Sarah Jessica Parker and Cynthia Nixon have been reminiscing on social media about first working together in 1982.

The "Sex and the City" co-stars, who are currently filming the reboot of their 1990s show, titled "And Just Like That...", responded to an Instagram photo of them in a 1982 TV movie, shared by The Cut yesterday (July 25).

"Good morning! @sarahjessicaparker has been one of my favorite acting partners for more than 40 years!" Nixon commented on the post. 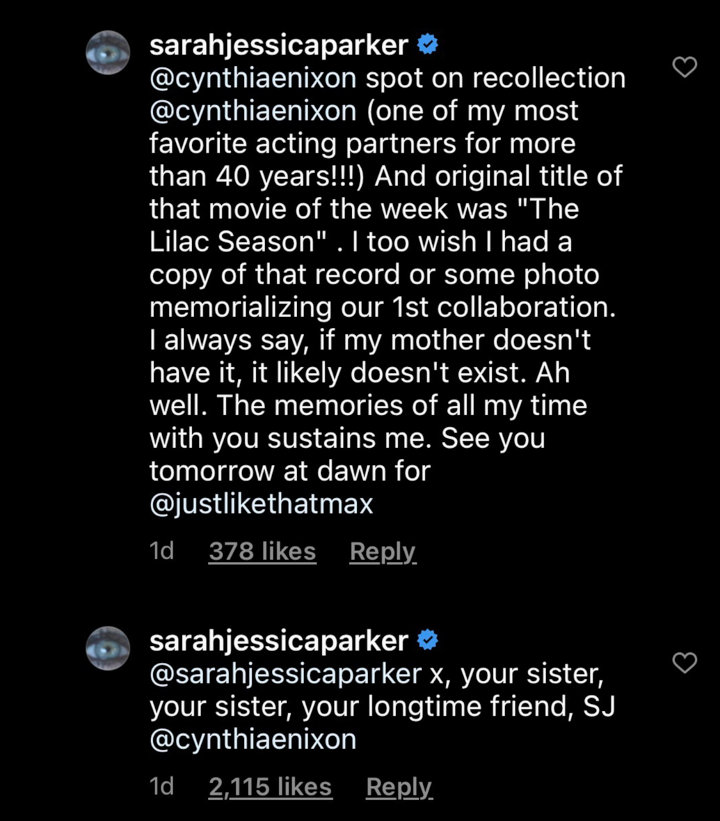 "We are here at 13 and 14 playing Vanessa Redgrave's daughters in a TV movie called My Body My Child, but we met even earlier recording Little House in the Big Woods on vinyl! [She was Laura, I was Mary] Anyone out there have a copy of the record or a photo of the recording session? I wish I did!"

Sarah responded, "I too wish I had a copy of that record or some photo memorializing our 1st collaboration. I always say, if my mother doesn't have it, it likely doesn't exist. Ah well. The memories of all my time with you sustains me. See you tomorrow at dawn for @justlikethatmax." 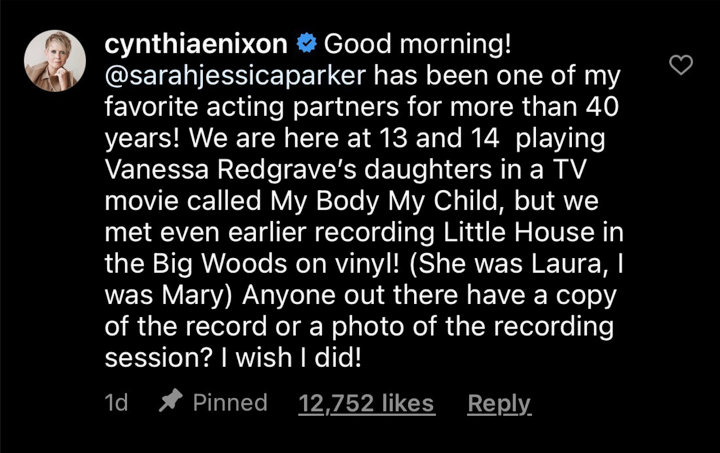 The two pals have reteamed with original "Sex and the City" castmates Kristin Davis, Chris Noth, John Corbett, and David Eigenberg for the reboot, but the show will go on without Kim Cattrall, who has repeatedly refused to reprise her Samantha Jones character.

On July 9, Parker shared a photo from the first day of filming "And Just Like That..." that featured her all glammed up on a Manhattan street with Nixon and their co-star Kristin Davis. When asked by a fan if she was excited being back on the set, she replied, "so many feelings. Cynthia walked into the trailer, I wouldn't let go of her! X"

Lily Allen Fuming Over Fans' Complaint About Her Being Underweight