The 'Kiss Me More' songstress takes the accidental dip on the stage of E11EVEN nightclub when she is performing the 2019 Rico Nasty-assisted single 'Tia Tamera'.

AceShowbiz - Doja Cat managed to stay cool despite having gone through an embarrassing and painful experience during her recent concert. After she fell on stage while performing in Miami, the "Say So" hitmaker decided to make fun of it by hilariously asking her fans to send videos of the incident.

On Sunday, July 11, the 25-year-old musician took to Twitter and penned, "somebody send me the video of me falling last night. Post in thread below thank u." She has since received plenty of clips from her followers.

Doja Cat asked fans to send her a video of her falling incident in a Miami concert.

After sending a full video of Doja's fall, an individual jokingly asked, "are u good like did u hit anything cus u fell like a pencil." The tweet didn't go unnoticed by the singer/raptress who then replied, "APENCIL UFGJGDDNKHFVJJFFGB HELP." She also retweeted another tweet in which her follower suggested that she could "make a beat out of" a one-second snippet of the video cut. 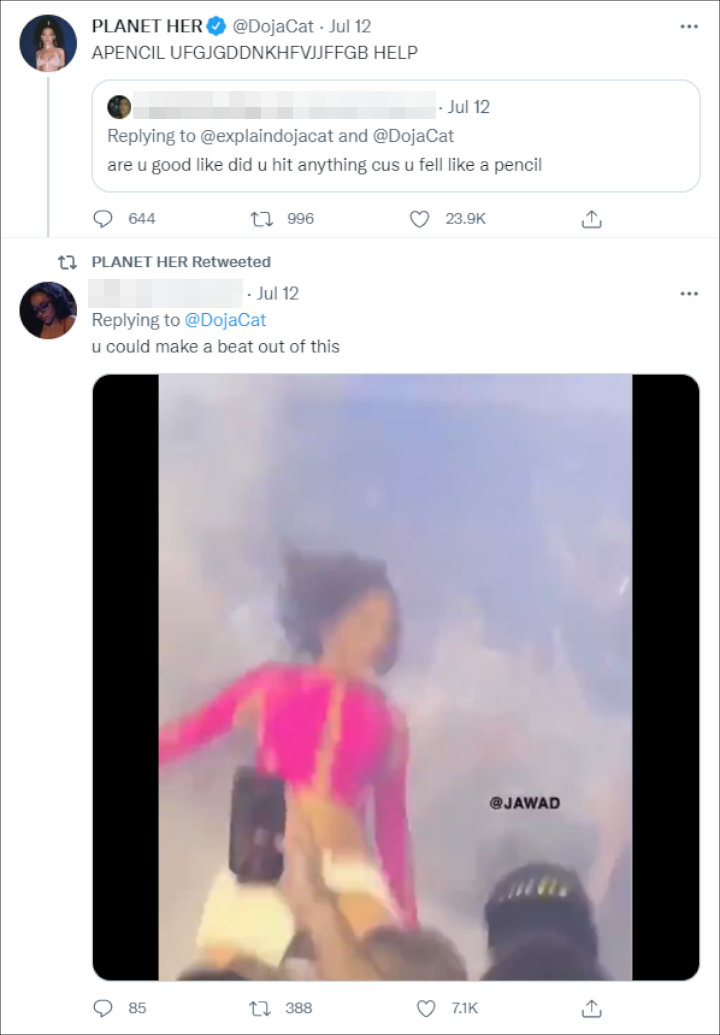 Doja Cat responded to fans sending her videos of her falling on stage.

Doja accidentally took a tumble on the stage of E11EVEN nightclub on Saturday, July 10. At that moment, she was performing her hit featuring Rico Nasty, "Tia Tamera". Her fans screamed out in shock after she fell on her back. The femcee, however, rebounded from her fall immediately by tossing her hair around and jumping back to her feet.

Many on Twitter applauded Doja for her move. One fan in particular raved, "You got up like a champion." Another gushed, "And that's how you do it! Fall and get back up and keep going. I just love @DojaCat." A third chimed in, "You ROCK you FIRE Fire @DojaCat !!! Impressive move and just keep going - you trooper! That's tier 1A professional."

The incident might have not been a big deal for Doja since her third studio album "Planet Her" launched at No. 1 on Billboard's Top R&B Albums and No. 2 on the Billboard 200. The project itself features guest appearances from Young Thug on "Payday", The Weeknd on "You Right", Ariana Grande on "I Don't Do Drugs", J.I.D. on "Options" and SZA on "Kiss Me More".

Jessica Biel Takes A Plunge Into Wellness World With Kinderfarms