Becoming a part of the brand known for their line of spin bikes and treadmills, the 'Timber' hitmaker will write a new anthem to inspire members and to be used in commercials.

AceShowbiz - Pitbull is getting into the gym game by becoming a partner in Echelon Fitness. The hitmaker and entrepreneur is now a part of the brand known for their line of spin bikes and treadmills.

As part of his new initiative, Pitbull will write a new anthem for Echelon to "inspire members."

The new track will also feature in Echelon commercials and the company bosses will also unveil a special "Ride with Pitbull" channel, with themed rides featuring music from the rapper, Jennifer Lopez, Marc Anthony, Becky G, and more. Meanwhile, Pitbull's lead dancer, Jenny Valdes, will be one of the featured instructors.

"It is truly an honor to partner with Echelon Fitness," Pitbull says in a press release. "With this new venture, we look forward to producing new avenues for music and fitness. Music is the universal language. Fitness is a cultural movement. Together we will create a powerful generation. I don't know about you but that makes me feel good, Dale!"

"Learning Pitbull was a fan of our product and our community was humbling," Lou Lentine, the president and CEO of Echelon Fitness, adds. "Pitbull has featured and been featured with some of the biggest talents in the music industry. And now his latest feature is with Echelon Fitness. We are so excited to welcome Mr. Worldwide to the team!"

This partnership with Echelon Fitness was not the only venture Pitbull took on outside of music world. In mid-January, it was announced that the "Timber" hitmaker has become the new co-owner of NASCAR racing team Trackhouse. 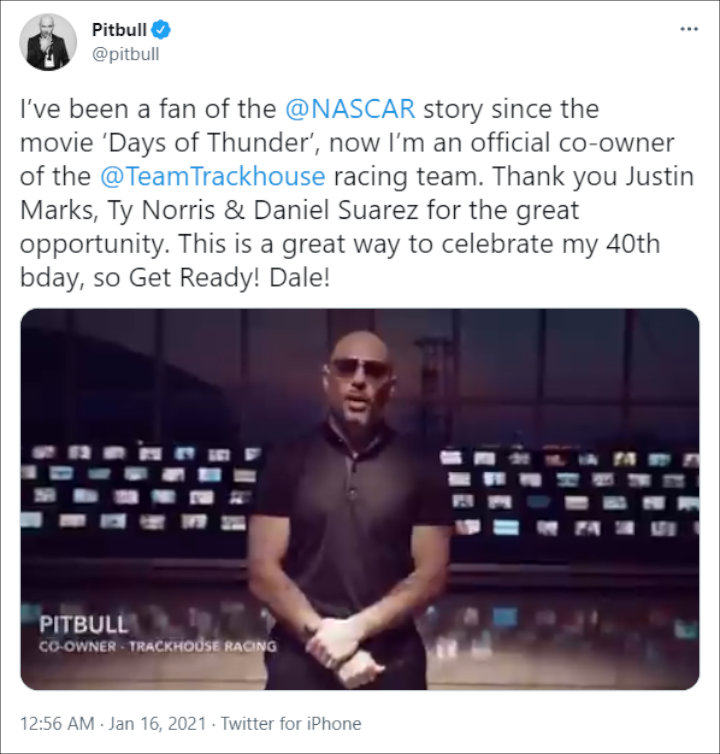 Pitbull announced himself as the new co-owner of NASCAR racing team Trackhouse.

"I've been a fan of the @NASCAR story since the movie 'Days of Thunder', now I'm an official co-owner of the @TeamTrackhouse racing team," the rapper tweeted at the time. "Thank you Justin Marks, Ty Norris & Daniel Suarez for the great opportunity. This is a great way to celebrate my 40th bday, so Get Ready! Dale!"