When revealing his estranged wife's recent condition after being rushed to the hospital, the former reality TV show star says that she is still in 'pretty rough shape.'

AceShowbiz - Evan Bass begs for strength amid Carly Waddell's health crisis. Staying by his estranged wife's side during the emergency hospital visit, the former "Bachelor in Paradise" star asked his fans and followers for their continuous prayers.

"Thanks for all the prayers and support," the reality TV star penned in an Instagram Story he posted on Monday, June 14. He continued in his note, "After 9 hours we left the hospital but she's still in pretty rough shape and may have to go back. Continued thoughts and prayers are so appreciated. And she knows she's beloved." 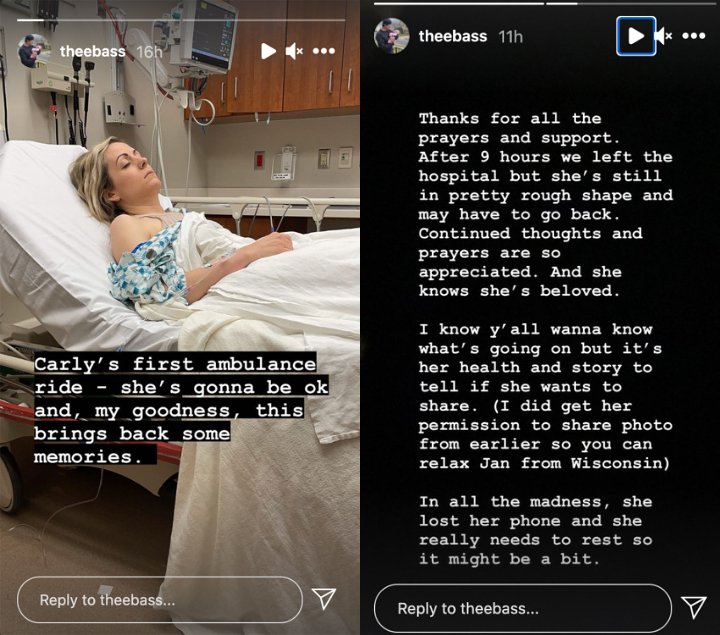 Elaborating further, Evan shared, "I know y'all wanna know what's going on but it's her health and story to tell if she wants to share." He concluded his post, "In all the madness, she lost her phone and really needs to rest so it might be a bit."

Prior to asking for more prayers, Evan uploaded a photo of Carly sleeping in an ambulance on his Instagram Story. Over the snap, he wrote, "Carly's first ambulance ride - she's gonna be ok."

"My goodness, this brings back some memories," Evan continued, referencing the former couple's time on "Bachelor in Paradise" in 2016, during which medics were called to help him following a night of heavy drinking. Before receiving criticism about his post, he stated, "I did get her permission to share [the] photo from earlier so you can relax Jan from Wisconsin."

Evan and Carly decided to go separate ways after three years of marriage. The former couple, who met in the third season of "Bachelor in Paradise", declared in a joint statement back in December 2020, "We have made the difficult decision to separate."

"We will always cherish our time together and continue to have the utmost respect for one another as we focus on what's best for the future of our family," the two, who are co-parenting 1-year-old son Charles Wolf and 3-year-old daughter Isabella Evelyn, added, "We greatly appreciate everyone's love and support and kindly ask that you please respect our family's privacy as we navigate through this."

Jimmy Kimmel All Smiles While Dancing With Daughter at Her Wedding