In his piece, Eric Deggans accuses the 'Saving Private Ryan' actor of making a career out of 'amplifying ideas of white American exceptionalism and heroism.'

AceShowbiz - NPR writer remained defiant over his recent comment about Tom Hanks. Despite facing backlash after urging the "Greyhound" actor to be an "anti-racist" in his column, Eric Deggans declared that he was "proud" of his piece.

Deggans responded to the criticism via Twitter on Sunday, June 13. "The insults and bullying are already piling up in my Twitter timeline. But I'm proud of my column today on Tom Hanks' op-ed about teaching the Tulsa Race Massacre; I'm a fan, but what he said is not enough. It's time for Tom Hanks to be antiracist," he stressed. 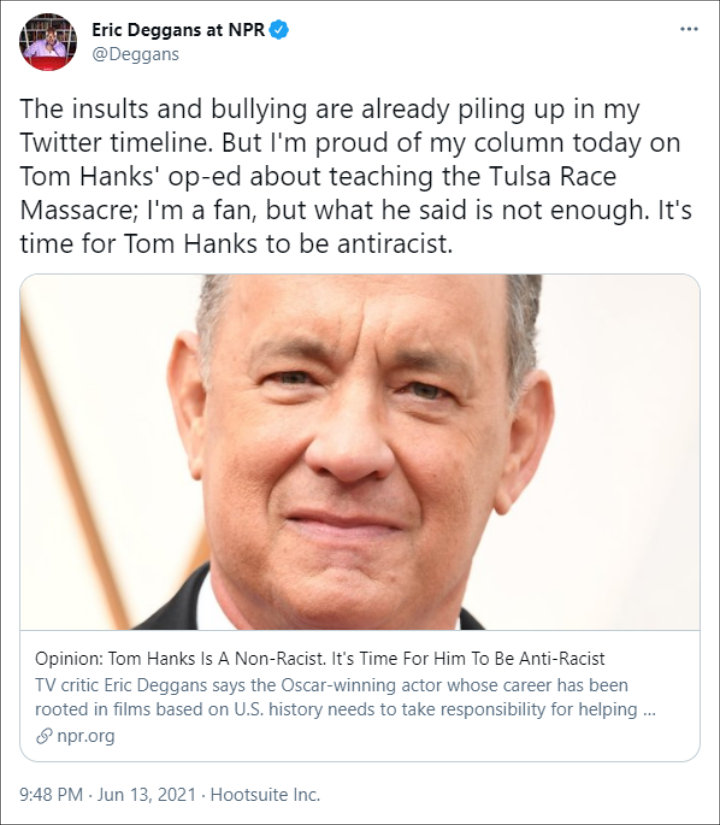 In his column, Deggans weighed in on Tom Hanks' guest essay for the New York Times. In his writing, the latter is calling for more teaching about the Tulsa Race Massacre, during which as many as 300 black people were killed and their town was destroyed by a white mob.

"History was mostly written by white people about white people like me, while the history of Black people - including the horrors of Tulsa - was too often left out," the husband of Rita Wilson penned. "Until relatively recently, the entertainment industry, which helps shape what is history and what is forgotten, did the same. That includes projects of mine."

Hanks' statement, however, "is not enough" for Deggan, who accused the former of building "a career playing righteous white men" and "amplifying ideas of white American exceptionalism and heroism." The columnist then added, "He is a baby boomer star who has built a sizable part of his career on stories about American white men Doing the Right Thing."

After his column was released, Deggans drew criticism from many. One in particular was from a Twitter user who tweeted, "No good deed goes unpunished. Tom Hanks writes op-ed urging coverage/teaching of Tulsa massacre. Black columnist says, yeah, but when are you going to apologize for making a career out of 'amplifying ideas of white American exceptionalism and heroism.' " Another simply noted, "exhausting."

Couple Praises Tom Hanks for Officiating Their Wedding: 'There's a Level of Comfort'