The 'Love Story' hitmaker supports the 'Summer of Equality' campaign that promotes the act providing 'comprehensive federal nondiscrimination protections for LGBTQ people throughout the country.'

AceShowbiz - Taylor Swift is celebrating Pride Month by "proudly" supporting GLAAD's "Summer of Equality" campaign. The "Love Story" hitmaker used her platform to urge senators to pass the passage of the Equality Act for American LGBTQ.

On Tuesday, June 1, the Grammy-winning singer took to her Instagram Story to mark Pride Month. "I want to take a moment and thank the courageous activists, advocates and allies for their dedication to fighting against discrimination and hatred," the 31-year-old penned over a rainbow-colored background. "And as always, today I am sending my respect and love to those bravely living out their truth, even when the world we live in still makes that so hard to do." 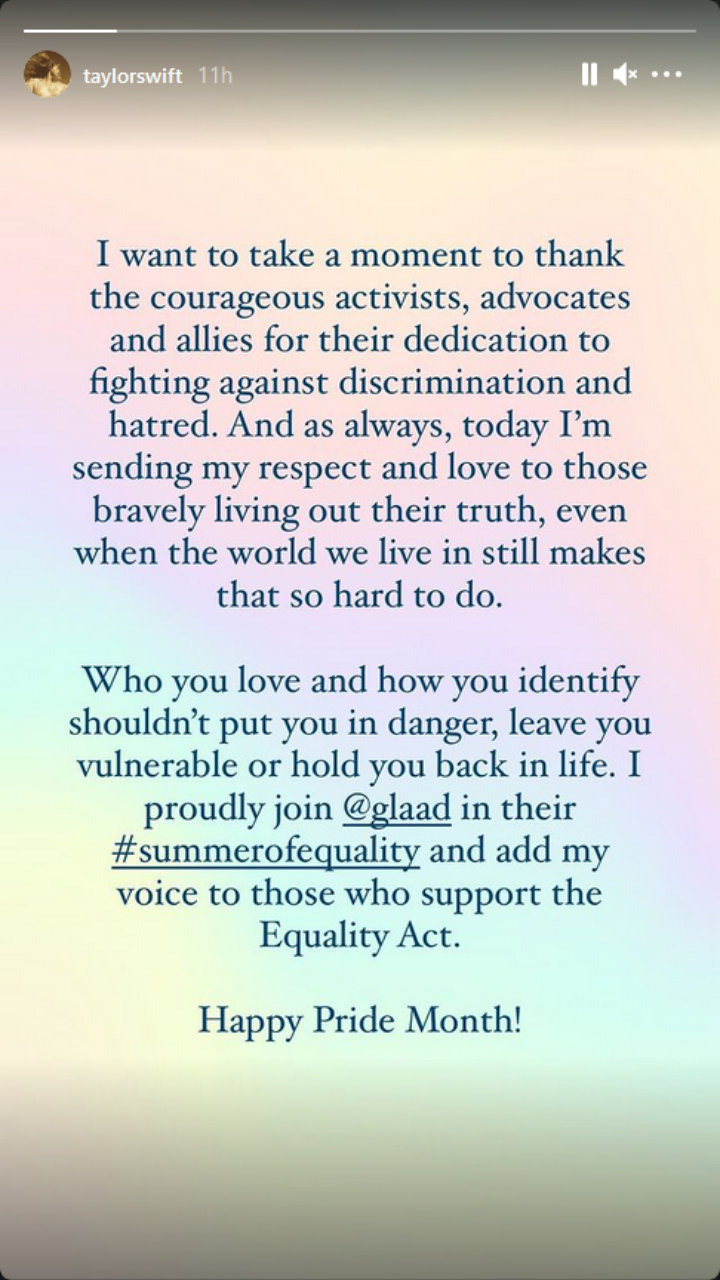 Taylor Swift urges senators to pass the passage of the Equality Act via Instagram Story.

"Who you love and how you identify shouldn't put you in danger, leave you vulnerable or hold you back in life," she added further. Announcing her support for the campaign, she stated, "I proudly join GLAAD in their #summerofequality and add my voice to those who support The Equality Act." She went on to conclude, "Happy Pride Month!"

Taylor also shared her statement on Twitter. Responding to her tweet was GLAAD President & CEO Sarah Kate Ellis. When replying to the "Blank Space" singer's post, Sarah went on to thank her for the help in echoing the "Summer of Equality" campaign. "Passing the Equality Act must be a priority for the safety and progress of every LGBTQ American. Thank you @taylorswift13 for helping us launch #summerofequality to get every senator to vote yes," she wrote.

GLAAD is currently promoting a petition, urging U.S. lawmakers to take action on the Equality Act, which would "provide comprehensive federal nondiscrimination protections for LGBTQ people throughout the country." Those protections are said to extend to employment, housing, loan applications, education and other areas. The act passed the U.S. House of Representatives in February and is currently awaiting action in the senate.

Taylor's statement to support the LGBTQ community came after she broke record as she secured the biggest one-week vinyl album sales in the U.S. with "Evermore". The album was originally released in December 2020 but only arrived on vinyl last Friday, May 28.