After the 'Keeping Up with the Kardashians' star unveils her new temporary look on social media, many liken her to Jeffree Star, who was previously rumored to have had an affair with Kanye West.

AceShowbiz - Kim Kardashian has sent the internet into a frenzy with her recent appearance. After she showed off a picture of herself with blond hair and eyebrows on social media, the "Keeping Up with the Kardashians" star shocked her online devotees as she was almost unrecognizable.

The 40-year-old reality TV debuted her new look via Twitter on Thursday, April 29. Putting out photos of herself before and after the makeover, she wrote in the caption, "Today's bleached brows for a special shoot." 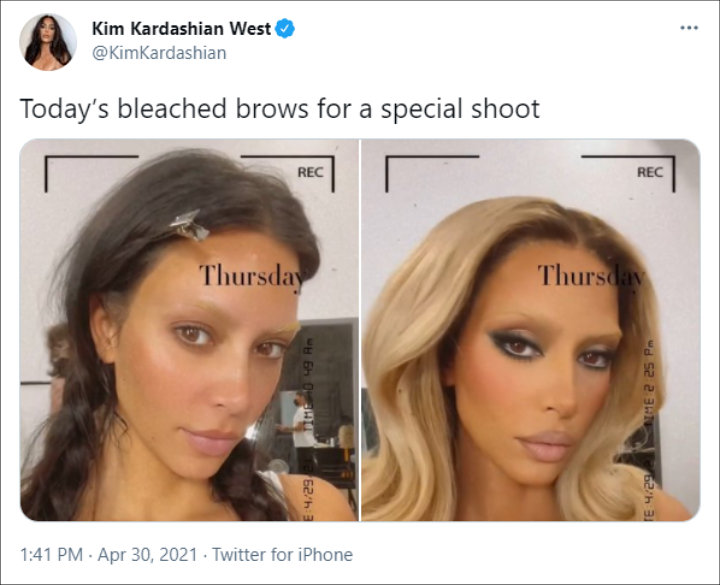 Many of Kim's fans were in disbelief over his hair and eyebrows transformation. Some others, on the other hand, likened her to Jeffree Star, who was previously rumored to have had an affair with her now-estranged husband Kanye West.

One of Kim's followers replied, "Girl....even if you try to dress up like Jeffree, you're not gonna win Kanye back." Another chimed in, "Kim it doesnt look good on you. Look old. You look like Jefree Star." A third questioned, "Why would you want to look like Jeffrey?! Is this for Kanye?"

Around the same time she shared the post, however, the younger sister of Kourtney Kardashian unveiled a mirror selfie that saw her with sporting brunette hair and eyebrows again. In the accompaniment of the tweet, she penned, "But just like that I'm back dark..."

Kim's makeover came around five months after affair rumors between Kanye and Jefree hit media headlines. The YouTube personality, however, has shut down the speculations. "I guess some girl made up a whole lie on TikTok, and it went 'viral,' where she insinuates Kanye and Kim are getting a divorce because a big male beauty influencer is sleeping with him," he said of TikToker Ava Louise who brought up the rumors.

"Let me just say this one time for any news outlet: I like very tall men. Me and Kanye have never hung out, and this whole thing is really funny," the beauty guru went on emphasizing. "I guess if this is a start to my new year, happy new year! I really can't!"