Azealia Banks on Her Shooting Her Shot at Kanye West: 'You Guys Really Took That Kanye Joke?'

After sparking rumors that she is a candidate for the soon-to-be ex-husband of Kim Kardashian's next romance, the '212' hitmaker writes on Instagram Story and calls it 'Kanye Joke.'

AceShowbiz - Azealia Banks has made a headline thanks to her latest social media post, but she felt the need to dim it out now. After telling fans that she was lining up to be the the next fling of Kanye West, the "Black Madonna" raptress tried to calm the buzz caused by her remarks by calling it "Kanye joke."

The 29-year-old femcee took to her Instagram Story page on Sunday, April 18, to addressed the headlines she sparked. "You guys really took that Kanye joke and ran with it huh?" she simply asked in her post.

The "Kanye joke" was brought to public's attention two days earlier when the "Chasing Time" spitter posted on her social media account a headline picture of Kanye with a header that read, "Kanye reportedly wants his next relationship to be with an artist who can 'speak the same language.' " 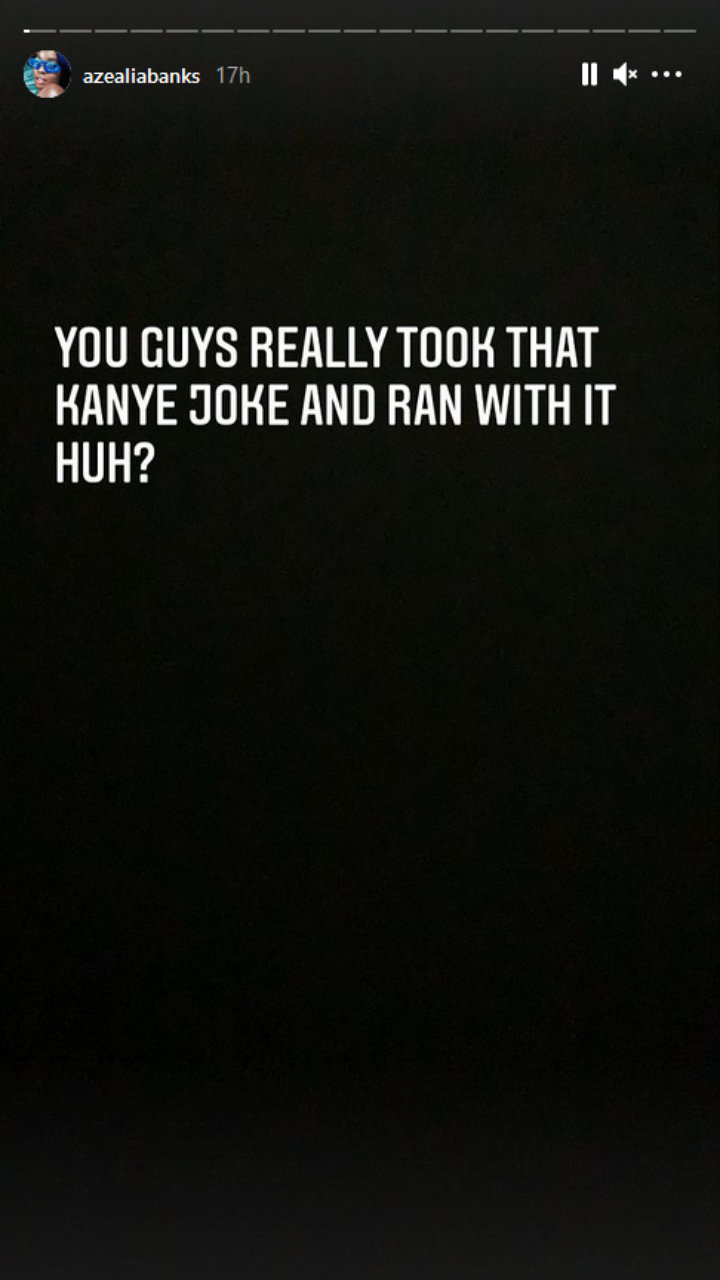 Along with the headline snapshot, she wrote in the caption, "It's me guys. The powerful black demon entity awaiting in my ovaries and kanyes testicle is finally about to be unleashed upon the world." She added, "All of you n****s are going to JAIL."

That post has, of course, swarmed by many comments. "Powercouple," one commented, while other fans shared their thoughts by writing such reply as, "Artistically y'all would kill everyone with a collaboration," and "Get married. Have kids. And make a joint album titled 'everything is love by the wests.' "

Kanye and estranged wife Kim Kardashian officially called an end to their marriage in February with her filing for divorce. Amid the former power couple's divorce process, words came out that Kanye hopes to have a romantic relationship "with an artist and a creative person." A source told Page Six that "The Life of Pablo" rapper wishes for a partner "can speak the same language to each other."