Three years after calling it quits with the former 'Friends' actress, 'The Leftovers' alum says that 'it would be a loss' if he stops keeping in touch with her.

AceShowbiz - Justin Theroux has debunked growing rumors surrounding his split from ex-wife Jennifer Aniston. In a candid new interview, "The Leftovers" alum revealed that the swirling speculations are "not true, for the most part."

Gracing the cover of Esquire magazine, the 49-year-old shared in his profile story that he rejected tabloid reports suggesting that his and Jennifer's desire to live on opposite coasts was a factor in their divorce. He told the outlet, "That's a narrative that is not true, for the most part."

Theroux then pointed out, "Look, people create narratives that make themselves feel better or simplify things for them. That whole 'This person likes rock 'n' roll, that person likes jazz. Of course!' " He further stressed, "That's just not the case. It's an oversimplification."

Elsewhere in the interview, the "Wanderlust" actor talked about his relationship with the "We're the Millers" actress. He admitted, "I would say we've remained friends." Detailing how they maintained a good relationship post-divorce, he stated, "We don't talk every day, but we call each other. We FaceTime. We text."

"Like it or not, we didn't have that dramatic split, and we love each other," he added. "I'm sincere when I say that I cherish our friendship. We can not be together and still bring each other joy and friendship."

Gushing over the "Friends" alum, the "On the Basis of Sex" actor said, "Also, she makes me laugh very, very hard. She's a hilarious person. It would be a loss if we weren't in contact, for me personally. And I'd like to think the same for her."

Though many former couples find it difficult to stay amicable after separation, Theroux and Aniston seemingly have managed to make it work. He further noted, "I think that when you get good at relationships -- and here I am, single -- if you love the person the same way you loved them in the relationship, it would behoove you to love them the same way out of the relationship." 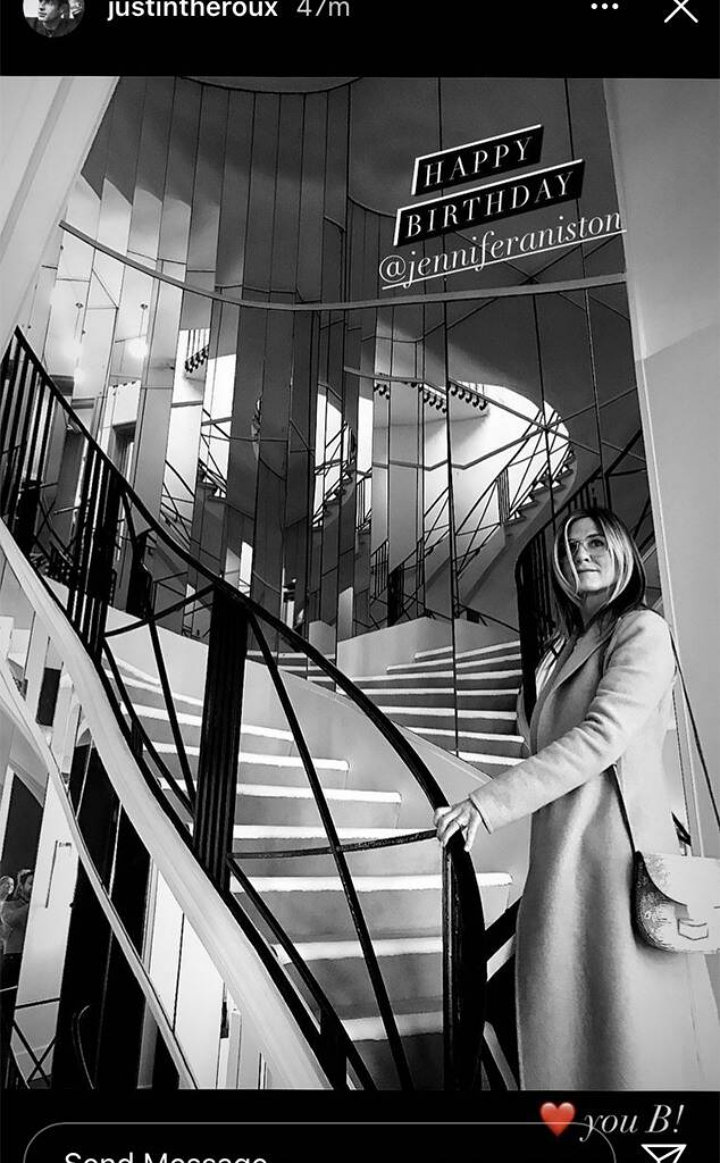 Justin Theroux shared a sweet tribute to his ex-wife Jennifer Aniston on her birthday via Instagram Story.

Theroux and Aniston decided to part ways at the end of 2017 after two years of marriage. In February 2020, he shared a sweet tribute to celebrate his ex's 52nd birthday. At that time, he shared via Instagram Story a black and white photo of Jennifer along with a caption, "Happy birthday @jenniferaniston." At the bottom of the snap, he added, "[love] you B!"