Dressed in a risque orange bra and matching sparkly thong, the Grammy-winning raptress flaunts her impressive pole dancing skills along with other dancers in a nightclub.

AceShowbiz - Megan Thee Stallion and Lil Durk have treated their fans to a new collaboration. On Thursday, April 15, the "Hot Girl Summer" hitmaker and the "Still Trappin'" MC dropped a new music video for her track "Movie", in which they take over a strip club.

Megan and Lil Durk announced its release on their respective Instagram accounts. Sharing a part of the clip, she declared, "I missed Houston so much I had to bring it to me 'MOVIE' OUT NOW @lildurk @713djeric." The 28-year-old rapper, meanwhile, wrote on his own caption, "Megan we might got the #1 strip club song right now @theestallion video out now !!!!"

Dressed in a risque orange bra and matching sparkly thong, the Grammy-winning raptress flaunts her impressive pole dancing and twerking skills along with other dancers in the "Movie" music video. She and her co-stars appear to have so much fun as they drink expensive liquor and take shots. The clip also displays her and the Only the Family founder throwing money around the dance floor.

Megan has since gained praise from her online devotees. Taking to the YouTube comments section, one individual gushed, "Megan DOES NOT disappoint. Never has. She always serves." Another user raved, "What we needed to get us through the day! Megan and Cardi should open up a strip joint, call it WAP." A third chimed in, "Why Megan slay every music video?"

"Movie" is the fourth single from Megan's debut album "Good News" to have its music video. It followed "Cry Baby" featuring DaBaby, "Body" and "Don't Stop", in which she collaborated with Young Thug. "Good News" itself was released in November 2020.

Megan's new music video came after it was unveiled that her and Cardi B's raunchy performance at Grammy Awards generated more than 1,000 complaints to the Federal Communications Commission. Many of the complainants dubbed their March 14 performance "disgusting" and likened it to "pornography." 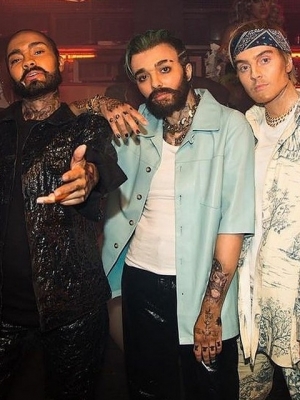